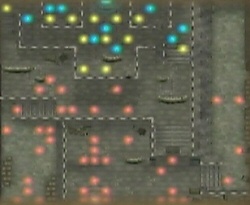 Survive for 15 turns or defeat boss

Chapter script
[view]
“Having anticipated Queen Elincia's attack, the majority of Duke Ludveck's forces left Felirae. The troops stationed at Castle Felirae were merely the bait with which to lure Geoffrey and his troops away from Melior.
In Geoffrey's absence, Ludveck's objective is nothing less than to take the royal palace...and Queen Elincia with it. Lucia, foreseeing a possible attack on the capital, arranged for Queen Elincia and Princess Leanne to be secretly moved to Fort Alpea.
Yet Lucia herself is unable to evade Duke Ludveck's agents. She is captured in the dead of night while attempting to contact an informant.
Queen Elincia receives the sad news the next morning.”
—Opening Narration

Elincia's Gambit (女王エリンシア Joō Erinshia lit. Queen Elincia) is Chapter 2-E of Fire Emblem: Radiant Dawn. Elincia and Haar rejoin in this chapter. However, Lucia is unavailable for this chapter.

Provided they survive, Marcia arrives at 1 turn before player phase starts, then the Crimean Royal Knights, including Geoffrey, Kieran, Makalov, Astrid, and Danved will arrive from the alley east of the area where the Crimean army starts on Turn 8.

This chapter is quite difficult, and rightfully so: There are many ways each of your characters can die, and in total, Ludveck outnumbers you greatly. (At the start, 46 v. 20, all reinforcements counted for, 93 v. 27). This is the best time to combine all your best strategies, and ensure each unit does what they're best at.

Be VERY wary of Crossbows and Bowguns. Your main unit, Elincia, along with a useful Falcoknight, Marcia, can both be killed in a single shot by these monstrous weapons. The reason is this: When a weapon is effective against an unit, its might is tripled, but not the strength of the attacker. Because bowgun Might stats are high to offset the fact Strength is not used, the normal ATK may be inferior but will be tripled entirely which results in a much higher damage value.

To combat this, have units that are not affected by Bows attack them, such as Haar (not a good choice solo, more on this later), Brom, Nephenee, any of the Laguz sans Nealuchi, or even Heather.

There are two completion criteria: Defend for 15 turns, or kill Ludveck. The former is obviously easier, but others who want a challenge (and EXP and items!) can beat back the line of enemies.

Begin with a blitzkrieg strategy: have whatever strong units you can charge down and clear out the center platform for you (Haar is a great unit for this.) Send Haar to the right, as Thunder Mages do not crowd there until later, but tons and tons of Generals will. Use Elincia plenty in this initial strategy, and ensure you take out the closest Bowgun wielder with her. The Brave property of her Amiti keeps her safe. Use Leanne to Vigor Elincia (and Marcia, if you can set it up right), and clear out the initial crowd. Double-check the range of all bow users, and make sure Elincia and Marcia Canto out of the way before they are shot to death. Brom and Nephenee are perfect for defending the left side, as no unit on the left holds a Hammer and Nephenee does not suffer any weaknesses. Heather is a bit useless, but you can snipe quite a bit with her knife.

The Laguz are great units in this map on either side, as no Fire mages of any sort appear. Be wary of their transform gauge, however.

Use Haar to take out the enemy General with a Hammer to ensure your Allied units are a lot more useful. Calill should inch closer and closer, using all five uses of her Meteor tome as she goes.

Next, have Elincia begin charging down the right side. Hands-down, she can kill anything with her Brave-property Amiti. Have Leanne trail along a bit behind her, and pair Marcia with her to reap the full benefits of Leanne's Vigor, and get an extra kill or two. When the Crimean Royal Knights appear, simply charge through anything in your path, as no enemies carry Horseslayers, but be wary of Geoffrey's HP, as his death results in Game Over as well.

Defensively, Brom and the Laguz are your saviors. Have Brom hold any of the multiple choke-points at the left, and snipe as much as you'd like with Heather. If Brom needs a Vulnerary, swap Nephenee in and continue the defense. The Laguz can easily brush over anything that threaten them while transformed. Haar should defend the right side. Callil should focus on Meteor-ing weak enemies and you should let the Allied units rush to their death, as them simply charging through makes it a lot easier for you to defend.

As for Elincia and Marcia, in a defense strategy, they should hit-and-run. Ensure you count correctly (both have 9 move), and do this: Have Elincia swoop down, kill an enemy, Canto to the top of the wall and have Leanne Vigor her, attack again, then Canto back to the wall; Rinse and repeat. This is a great way of getting rid of potentially dangerous units. Always ensure one unit is holding the broken wall near the center, as they are practically invincible with height advantage, and there are two points on the left: you can swap Olivi Grass with Lethe and Mordecai, but Haar makes a great wall too.

Potentially, with Geoffrey's group as reinforcements, you can still kill Ludveck after employing this strategy by using Geoffrey's group to countercharge Ludveck's flank (as Geoffrey put it), then pour your units through and kill Ludveck with any combination of: Haar, Geoffrey, Kieran, and Elincia.

Partner units are useful in this chapter, as healers will prioritize healing your units and others will take and deal some damage (All XP they should earn is converted to Bonus EXP at the end of the chapter) - but be wary of the space they use. Use Elinicia and Amiti to kill the bowgun wielders as top priority as they can OHKO all your fliers bar Haar and then go for archers. Callil or Nealuchi can hold the top of the ledge whilst everyone else goes on a rampage. However, it is more important to get your chokepoints covered by turn 2 (on the right) and turn 3 (on the left) as long as you keep Leanne safe - clear the landing with Elincia, Marcia and anyone else not holding chokepoints.

Load Haar down with ranged weapons (at least three, preferably the short axe), a concoction (optional) or keep Elinicia handy (if you do not have a concoction) and send him down the right of the main area to hold the door that the generals break though. He has plenty of defence and enough Attack Speed to double a lot of the knights but be wary of thunder mages - if they hit use a concoction/vulnerary or heal him with Elincia. Ranged weapons will help him counterkill and if you have the hammer he's a good choice for it.

Hold the left horizontal staircase at the top with Nephenee keeping Brom and Mordecai nearby in case they need to take over tanking duties. By holding it at the top you can stand on top of the ledge and throw weapons down - take advantage to get EXP for Heather, Calill and Brom. Be sure to get the Nullify scroll by killing the enemy knight. Alternative you can use them (except Nephenee) to lure ranged attackers from Ludveck's area and hit them on the counter. Leanne and Marcia can make good use of Canto to do hit and run attacks to weaken enemies but keep both far from bowgun users even from atop a ledge.

The Royal Knights are superfluous, you can set them up to get the Silver Greatlance but also leave them after that for the rest of the mission unless you want to train any of them - otherwise, they will be stealing Haar's EXP.

You can either hold these positions until time is up or you can lure out Ludveck and his units by moving Haar towards the centre middle so he can be canto'd by Leanne when she "sings and runs". To kill him use Elincia & Haar with Leanne helping if necessary.

If you want to defeat Ludveck, you should combine the skills of Kieran and Geoffrey. Once there is an opening, have Kieran attack Ludveck with the Hammer, and then have Geoffery finish him with the Brave Lance. Once in Ludveck's small room, he will begin moving toward the Royal Knights, so this process will become more simple. If the Knights are overpowered in Ludveck's area, an alternative strategy is to have them retreat, kill the units pursuing them, and then return to finish Ludveck. An alternative is to have Elincia attack Ludveck with the Amiti. She will normally be able to double Ludveck so she can attack him a grand total of 4 times. If Elincia cannot kill him in one round, then have a powerhouse like Haar attack Ludveck to damage him a bit (or do it the other way around by letting Elincia damage Ludveck and have someone else finish him although because haar doesn't have that good avoid it would be better to make elincia to do it).