Elise (エリーゼ Erīze) is a playable character of the Nohr route in Fire Emblem: Fates. She is the youngest child of the Nohr royal family. She is voiced by Ayaka Suwa in the Japanese version.

Elise is the youngest child of five in the Nohrian royal family and the daughter of Garon and one of his concubines. Her milk mother is Casita. She eventually received another elder sibling when the Avatar was adopted into the family. She has the services of Effie and Arthur.

Elise is sad to see the Avatar's decision to join Hoshido's side of the war. Elise is begrudgingly convinced by her siblings to join the war, though she does not want to fight the Avatar at all costs.

In Chapter 23, if the Avatar talks to Effie and Arthur, she will tell them to stop fighting the Hoshidans and help them instead, which they will comply with.

In Chapter 26, Xander challenges the Avatar to a duel and they accept. As the duel progresses, the Avatar struggles to block Xander's attacks. Just before Xander unleashes the final blow, Elise intercepts the attack, receiving a critical injury. Xander desperately tries to keep her alive, but her life quickly fades as she desperately asks him to stop the fighting and use love and warmth to end the war. She dies as she is cradled by Xander, much to Xander and the Avatar's shock.

In Chapter 28 Elise alongside Xander, Flora, and Lilith appear before the Avatar as a hallucination in the Avatar's near-death experience.

If you choose Nohr, Elise and her siblings will join the Avatar. She is the first sibling to join your army in that route.

She is the second of her siblings to join your army, starting in the Chapter 14. Having overheard Iago and Ganz mention Camilla has joined the Avatar's army, she realizes she is not a traitor as Xander and Leo believe and slips out of Castle Krakenberg to join the Avatar. Camilla attempts to convince her to rejoin Leo and Xander for her own safety, but she insists on staying with the Avatar even if it means coming to blows with her brothers.

The youngest of the Nohrian siblings, Elise's personality is defined by a pronounced lack of jadedness or cynicism, and is instead imbued with traits that are common to a child: Juvenile, innocent and pure. Tenderly loving her siblings, she does not hesitate to be generous in her displays of affection for them, a fact that is particularly pronounced in her treatment of the Avatar; right when she is first introduced in Chapter 1, she hurls herself into their arms and tightly embraces them in response to their professing their love for her. Yet another example illustrating this fact is that of her choice to dye specific strands of her hair purple in order to match the hair colour sported by Camilla. Despite being an adopted sibling, Elise became extremely close to the Avatar and truly sees them as an integral part of the family.

Despite her childish antics, Elise is known to be immensely astute in her observations of the situations that she finds herself involved in, adeptly adjusting her behaviour to suit the occasion. This fact is made particularly evident, albeit tragically, in Chapter 26 on the Birthright route; dismayed at Xander's refusal to back down from fighting the Avatar, she chooses to step into the fray and sacrifice her life in a desperate bid to stop him. It is through this act of hers that one can also derive that she is a selfless, courageous character, willing to go to the extremes in order to protect her loved ones from coming under harm.

Through her supports with Sakura, it is revealed that Elise is proficient at playing the violin, a fact that later sees the pair strengthening their friendship by performing duets alongside Sakura's koto. Her birthday is March 19th.

Birthright Chapter 6 - Reaching for the Light

Elise is a French name and a shortened variation of the name Elizabeth. It roughly translates from "pledged to God."

Artwork of Elise in the Cipher Trading Card Game.

Elise as a Troubador in Cipher

Elise as a Strategist in Cipher (1)

Elise as a Strategist in Cipher (2)

Elise as a Ninja in Cipher. 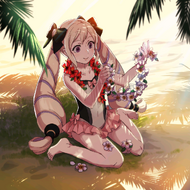 CG artwork of Elise in a Paradise Scramble DLC episode. 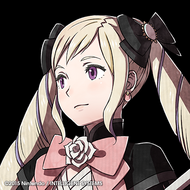 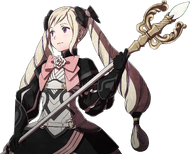 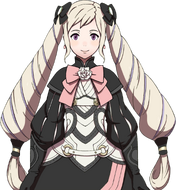