Elwind (エルウインド Eru uindo) is a second-level Wind magic tome in the Fire Emblem series, making its first appearance in Genealogy of the Holy War.

In Genealogy of the Holy War, this tome appears as one of few items that Lewyn starts out with. Due to the fact that this tome has a relatively low weapon level, it is thus usable by a good number of promoted magic-based classes. Much like other wind tomes available in the game, Elwind is rather lightweight, essentially splicing the possibility of its user suffering from Attack Speed deficiencies. Despite all the positive traits that this tome possesses, it is not easily passed on to the second generation, as it may only be used by Lewyn's children and Ced.

Elwind is the Up Special for Robin in Super Smash Bros. for Nintendo 3DS and Wii U and is their recovery move.

Robin fires a blade of wind below them, propelling themselves upward and can be fired twice in succession. It can also hit enemies below, dealing 5% damage, and has a meteor smash property. However, because it is a projectile, it can be reflected. It has a total of 9 usage before Robin is forced to discard the tome. They will have to wait 6 seconds before they equip a new Elwind tome. One of Robin's standard combos uses Elwind at the end if they mash their neutral attack during it. Robin will generate a small, condensed barrage of wind blades. Using this version of a standard combo will consume a durability point of Elwind.

The Elwind tome, as it appears in the first series of the TCG.

Lewyn casting Elwind on an enemy Knight in Genealogy of the Holy War.

Soren casting Elwind on an enemy Sniper in Path of Radiance.

Soren casting Elwind on an enemy Swordmaster in Radiant Dawn.

Map animation still of Elwind being cast in Radiant Dawn. 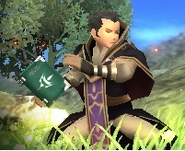 Brady wielding the tome of Elwind in Awakening.

Brady casting Elwind on an enemy General in Awakening.