Ember (ヌルファイアー Nurufaiā, lit. Nullfire) is a tome that is introduced in Fire Emblem: New Mystery of the Emblem. It is basically a Fire tome with significantly lowered Might, making it the weakest tome in the games that it appears in. However, unlike the Fire tome, Ember can still trigger criticals and skills, as well as giving a +10 boost to avoid in Fates. This tome is also very accurate, making it useful when accuracy is needed. It can also be a useful tool for training up a new mage in tomes when they already have damage skills.

In Fire Emblem Fates, Ember is known as Petit Fire (プチファイアー Puchifaiā) in the Japanese version.

*Worth zero when sold.

Merric casting Ember on an enemy Berserker in New Mystery of the Emblem. 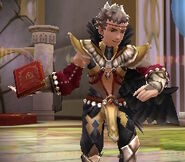 Odin wielding the tome of Ember in Fates.
Add a photo to this gallery
[view]Anima
Fire
Thunder
Wind
Others
Retrieved from "https://fireemblem.fandom.com/wiki/Ember?oldid=456386"
Community content is available under CC-BY-SA unless otherwise noted.