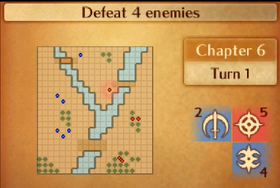 Embrace the Dark (闇へと進みゆく Yami e to susumiyuku, The Descent to Darkness in the Japanese version) is Chapter 6 of Fire Emblem Fates in the Conquest Version. The Birthright-equivalent chapter is In the White Light with the Revelation-equivalent chapter being Into The Ground. This chapter takes place in the Plains of Hoshido.

Although knowing their true nature about their birth family and not wanting to betray their adoptive family, Corrin decides to fight with the Nohrian army. Ryoma is shocked by Corrin's decision. Despite Ryoma's pleas to have them reevaluate the situation based on the tragedy that had just occurred to their mother and the innocent Hoshidan people, Corrin remains steadfast in their decision as they have unanswered questions that they need to confront King Garon directly.

Ryoma, furious that Corrin has been "brainwashed" into siding with Nohr, attacks Corrin, accusing them of betraying their family and using the Yato against them and forces them to fight. However, Xander steps in the way to protect them. The Hoshidan army is eventually defeated by Corrin and their siblings, and they are thereafter forced to make their retreat. Azura leaves to join Hoshido. With the war now unavoidable, Corrin begins their journey to defend their homeland they grew up in.

The objective is to defeat four enemies, even though there are 5 on the map. Jakob/Felicia (each one depending on Corrin's gender) will rejoin at the start of the battle. There is a slight change depending on difficulty, but it is typically negligible.

The five enemies on the map are simply Ryoma, Hinoka, Takumi, Sakura, and Yukimura. Ryoma is the hardest of the five, due to his high speed ensuring most attacks will miss him. Xander is closest to Ryoma. You can either fight him or move Xander away.

Hinoka and Takumi are in Guard Stance, though they are still relatively easy to defeat. While you fight those two, you can have Xander move for Yukimura and Sakura, as Ryoma is typically not worth fighting regardless of the difficulty you play in.

Ensure that only your Avatar and Jakob/Felicia finish off the enemies, as the Nohrian siblings will not get any experience upon defeating the enemy.

Should Camilla, Leo, Xander, or Elise be defeated in this chapter, they are not permanently defeated, and can still be recruited in later chapters. However, if either Corrin or Jakob/Felicia fall and the game is in Classic difficulty, then it's a game over for the former and permanent removal from the game for the latter; if one plays in Phoenix mode both will be revived at the end of the turn, and in Classic Mode Jakob/Felicia will be simply knocked out, but Corrin's incapacitation will still be a game over.