Marieve Herington
[view]
“I'm still in training, so I'm sure you could teach me a thing or two.”
—Emma

Emma is an original character from the trading card game Fire Emblem 0 (Cipher). Emma is a playable DLC character in Fire Emblem Echoes: Shadows of Valentia.

Emma is part of a traveling group, and once she reached Valentia, she and Randal got lost from the other travelers. They were suddenly attacked by brigands, and upon realizing that just the two of them couldn't survive, she flees to seek help and finds a nearby army, that happens to be Alm or Celica's party.

After defeating the bandits, Emma and Randal decide to join the party, as a thanks for the help, and also ask to be guided during their stay in Valentia. She is shown to admire the Pegasus sisters Est, Catria and Palla, as she is aware of the triangle attack and is training to develop her own technique, named "solo triangle attack".

She is a trainee Sky Knight sided with the Kingdom of Hoshido, and the rival of her Nohr counterpart Shade. In series 3, Dual Swords of Hope, Emma along with Shade join Ike's Tellius army.

Emma is a very cheerful thirteen-year-old girl that is fairly inexperienced and ignorant, so therefore she is easly flustered. She always strives to better herself by further her training as fledgling sky knight, though her silly ideas of techniques makes her easily teased. Although she is a bit of an airhead, oftentimes her keen senses can suddenly rear her head.

She is shown to be peeved by Randal's sloppy habits like gambling and his tastes in women, asking for her caretaker companion to be more responsible. She is in despair when he teases her and doesn't take her rants seriously because she is a kid, which Randal finds funny.

After the war, Emma departed Valentia for a new land. History makes no further mention of her, but some say she became one of the finest knights in the sky, taming pegasus, falcon, wyvern, and all manner of beast—always with a friendly smile astride her mount.

Emma appears in the following cards: 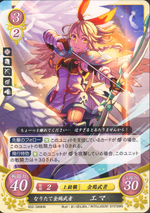 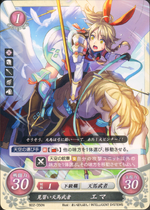 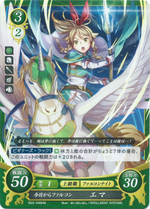 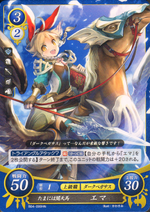 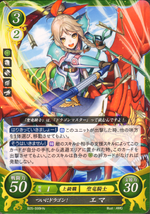 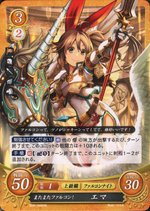 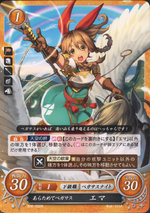 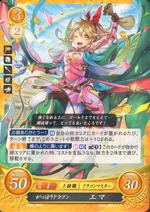 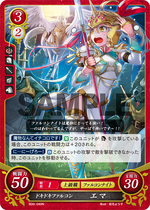 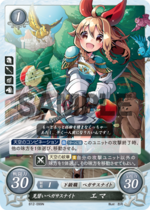 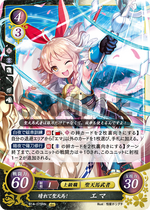 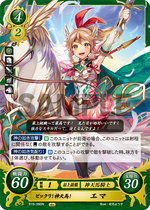 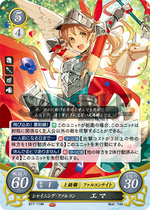 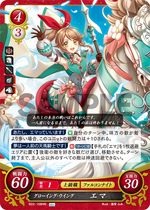 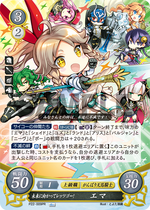 With a maximum printed Attack Value of only 50, Emma, like Shade, unfortunately comes off as a bit underpowered. Emma's main saving grace is her 30 Support Value, often allowing other Units to get just high enough to avoid missing an attack or getting whomped by the other guy. Her two Sky Knight N cards are basically the same, with her White card having Rescue, where you tap her to move an Ally Unit, and her Yellow card having a Bond Skill that does the same thing but at the cost of flipping her Face-Down. Her White Kinshi Knight card has the unfortunately low Attack Value of 40, but gains an extra 10 ATK when Supported by a Flier. This means her Kinshi Knight card can reach 110 ATK, but only when attacking a Flier while being Supported by a Flier. Her Blue Dark Flier card can gain 20 ATK if you reveal 2 Emma cards in your hand, but that is it. Her Series 3 Green Falcon Knight card is extremely situational, gaining 20 ATK only if there are exactly seven Units on the entire Field, a bonus that leaves the second any Unit is defeated or Deployed, and while her Series 5 Green Dragonmaster can Deploy itself when it is discarded by an opponent's Unit effect, and move any Ally Unit when Deployed, it still only has 50 Attack Value, making it a terrible attacking card. Her Yellow Jugdralian Falcoknight is probably her best bet at dealing any real damage, as it gains 10 ATK for the turn for every Flier Unit Deployed, meaning she can reach over 100 ATK fairly easily provided the player has enough Flier Units to Deploy along with enough Bonds to Deploy them all, and she can also gain 1-2 Range for a turn, meaning it is safe to Deploy her in the RearGuard where she would not be as likely to be defeated and still be able to take a couple swings at your opponent with her. In the end, while some of Emma's cards can get decent Attack, she is really best used for her Flier Support Skill and 30 Support Value.

The japanese spelling of Emma's name, Ema (エマ), is from the small wooden plaques used by Shinto worshippers to write their wishes, so that the Kami will then receive them, Ema usually have various animals pictures on them as well, befitting their meaning of the name meaning's Picture-horse (絵馬, Ema).