[view]
“I understand your feelings, Chrom. Truly I do. But if we give him the war he wants, then we lose, no matter what the outcome. Our last conflict nearly ruined the halidom. It left Ylisseans homeless and starving. We cannot repeat that mistake.”
—Emmeryn to Chrom in Chapter 4.

Emmeryn is a character from Fire Emblem Awakening. She was the Exalt, or Queen, of Ylisse, the older sister of Chrom and Lissa, the aunt of Lucina and Owain, and Morgan's potential mother if she marries Robin.

Roughly 15 years before the start of Awakening, after her father's sudden death shortly before her tenth birthday, Emmeryn succeeded him and became the new Exalt of Ylisse. For much of her reign, she spent it being a diplomat for peace reaching far and wide around Ylisse. She faced much hardship in the wake of her father's legacy, as most citizens feared she would continue the war against the Grimleal, but was supported by the Hierarch of Ylisse.

Initially, her subjects rejected her, with some throwing rocks to express their anger. Despite this, she ended the war against the Grimleal in Plegia by bringing the Ylissean troops home. Through this and further hard work to restore her kingdom, Emmeryn eventually managed to bring back the trust of the people, prompting a period of prosperity and peace within the halidom. However, the Grimleal still existed, and Plegia, now ruled by the power-hungry Gangrel, sought revenge for what they deemed an unjustified war, attempting to reignite war between the two nations. Much to his disdain however, Emmeryn refused to declare war on Plegia.

Gangrel pressured Ylisse by launching several attacks on the Ylissean-Plegian and Ylissean-Feroxian borders. Needing as much support as possible, Emmeryn sends the Shepherds to Ferox for support, which proved successful. Upon the Shepherds' return from Ferox, Emmeryn receives word that Plegian bandits attacked Themis and kidnapped the duke's daughter, Maribelle. Despite Chrom and Phila's protests, Emmeryn tries to parley with Gangrel. Gangrel demands the Fire Emblem in return for Maribelle, but she refuses, as she is aware of his ill intentions. Gangrel in turn sends his men to take it by force, but are repelled. Following the battle, Emmeryn realizes that war is inevitable and prepares accordingly.

Upon returning to the capital, Chrom encounters "Marth", who tells them that an assassination attempt is underway on Emmeryn. Although her identity is revealed, Chrom does not attempt to investigate further, dealing with the immediate situation at hand. They are able to protect Emmeryn from the assassins, following which both Chrom and Phila agree to move her to the eastern palace, one that the other nations were not aware of.

In the alternate future, Emmeryn was assassinated in the surprise attack by Validar, leading to the eventual ruin of the future.

By leaving, however, Gangrel uses this opportunity to besiege the lightly guarded capital. Her longtime friend, the Hierarch, betrayed her and an ambush was set at the Breakneck Pass. After repelling the Plegian ambush, she is informed that Gangrel is besieging the city. She decides to return to the capital to reassure the people that their leader stands with them, despite Chrom and Phila's protests. She returns to the capital with Phila and her guards as a result. Unsurprisingly, she is taken captive by Gangrel, who takes her to Plegia Castle for her execution. Chrom and the Shepherds quickly rush to the courtyard of Plegia Castle, where they nearly succeed in rescuing her. However, when Phila arrives as planned, Aversa summons a group of Risen Archers, who promptly kill Phila and her fellow Pegasus Knights and cut off Emmeryn's only escape. Gangrel tells Chrom to give up the Fire Emblem or else Emmeryn will be killed. Knowing that Chrom will die if he tries to save her, and that the Emblem is far too important to give to Gangrel, Emmeryn smiles and willingly throws herself off the cliff, much to Chrom and Lissa's horror, while Gangrel laughs at her apparent death.

In the aftermath of her apparent death, Emmeryn became a martyr amongst everyone who witnessed her sacrifice. Many within the Plegian army began to doubt the war itself and began to desert. Gangrel did his best to stamp out any defectors with little to no avail, crippling his army down to only his most loyal and those devout the cause of the Grimleal. Due to this falling out within Plegia, Chrom was able to quickly defeat the Mad King and avenges Emmeryn at Border Wastes. With Ylisse now without an Exalt, Chrom fills the position but initially refuses the title in memory of Emmeryn. Still, her life and sacrifice serve as guides for Chrom as he seeks the peace Emmeryn longed for.

In Paralogue 20, Chrom and his army arrives at the Mountain Village where the locals ask for their help to stop the Grimleal who have been kidnapping women to sacrifice to Grima. An elder of the village brings a young woman who previously was captured by the Grimleal, but managed to escape; it is quickly revealed that the woman is Emmeryn. Shocked that Emmeryn survived, Chrom, Lissa, and Robin are thrilled by this news, but quickly find out that she is suffering from amnesia as a result of her fall.

Despite the reunion, the Grimleal soon arrive to reclaim their sacrificial victim. Upon arriving at the field, they learn that Emmeryn has left the village to keep everyone safe. Thus Chrom and his army rush to rescue her and defeat the Grimleal. Upon killing the Grimleal leader, the rest of the cultists flee in the ensuing rout. Chrom, Lissa and Frederick attempt to converse with Emmeryn, but she is unable to remember any of them - much to Chrom's disappointment, but she consoles him and Lissa in a manner reminiscent of her past self. Chrom then vows to protect her as she did for him when he was younger.

After the defeat of Grima, Emmeryn never fully recovered her memories. She moved to Ferox where she lived an ordinary life, anew and unburdened.

Unlike her warmongering father, Emmeryn is a peace-loving, kind, and forgiving ruler. She detests fighting as much as possible, and always searches to settle matters peacefully, even against people who wish to kill her. She shows a lot of bravery, willing to walk clearly into a dangerous situation that puts her life at risk without a moment's hesitation. She loves her two younger siblings dearly as well as her people, and cares for their well being. Because of this, she makes the ultimate sacrifice for the well being of everyone at the cost of her own life, feeling that one life could save millions.

Sadly, even though she survived her fall, Emmeryn suffered severe brain damage. As a consequence she is unable to recall much of her former exalted life and having a fragmented speech pattern. Thankfully, she retains her loving and caring personality and a desire to remember her sister and brother. She is the most resilient person in the army.

In her support with Robin, Emmeryn will spend time struggling to recover her memory while Robin will tell her about the events that followed her "death" and how Chrom has changed from her sacrifice. In the end, she will remember Robin's name, which will excite them. If Robin is male, an S-rank support conversation is possible, where it appears that Emmeryn has regained more of her memory, being able to speak in more complete sentences.

Paralogue 20: NPC, joins at the end of the chapter if she survives.

Emmeryn is a standard Mage Character boasting the highest Magic cap of all non-child characters. Most of her stats are well rounded with an average of 42 for most stats except for two. Her strength growths and caps are dreadful, but this should not be an issue as Sages will not need to rely on strength, though some of her reclassings do. Her defense is low but just slightly ahead of Maribelle, meaning Emmeryn will need to avoid non-magical units especially. Luckily, her staff rank is already at A rank, letting her use Fortify from the beginning and her tomes are at C letting her use Arc spells.

Despite starting off with Mage skills, Emmeryn's base class is not a Mage, but a Cleric much like her sister Lissa. Emmeryn can serve as a great healer in all 3 of her base classes. If she becomes a War Cleric, her stats will balance off, but she will most likely have trouble bringing her strength up enough to do significant damage. Bolt Axes can be a good solution, but Emmeryn will need to train quite a bit or have a few Arms Scrolls to boost her Axe weapon rank. Emmeryn can learn Tomefaire if she continues on 5 more Levels as a Sage, making her an even more powerful Sage and Renewal in the War Cleric class to give her some HP if she ever gets hit physically.

Emmeryn's two reclassing options are the Troubadour and Pegasus Knight lines, just like Lissa as well. As a Troubadour, Emmeryn performs similarly to her as a Cleric but with much better movement and gains one new promotion class. As a Valkyrie, Emmeryn has slightly less luck, resistance, and skill than Maribelle, but exceeds her in most others. Emmeryn has higher caps in most stats over Lissa except for Defense, Resistance, and Luck. Nevertheless Emmeryn can make an effective Valkyrie unit and while in this class set she can grab Dual Support+ letting her be a viable support unit since she cannot support with anyone except for Robin.

As a Pegasus Knight, Emmeryn will need to work quite a bit again due to the heavy usage of lances for the initial class and as a Falcon Knight. Emmeryn is not well suited to be a Falcon Knight due to her low strength caps as Lances are her only attacking weapon in that class. Her defenses make Archers even more problematic giving her an exploitable weakness. A Shockstick can be a viable option, however it is better to leave her as a Sage if you want maximum damage output from her. She does make a decent Falcon Knight healer but again, for more potent healing, it is best to leave her in another one of her classes. As a Dark Flier, Emmeryn performs much better here with a higher Magic than Sumia and Cordelia along with the ability to use tomes. However she has slightly lower skill and defense over the two, but this should not hinder her much behind them. The biggest benefit of this class comes from her ability to learn Galeforce at Level 15, making her an even better map clearing unit, regardless of her finishing class.

Because Emmeryn shares the same class sets as Lissa, she can also serve as a potent Rally unit. Without the aid of the Bride DLC, Emmeryn is one of four parent generation units, the other three being Maribelle, Lissa, and Robin, who can learn 5 Rally Skills. Emmeryn has access to Rally Luck, Rally Magic, Rally Resistance, Rally Speed, and Rally Movement. It will require her to venture into every single one of her reclassing options, but it is well worth the effort when Rally styled play is needed.

Gentle Exalt
Kind and loving Exalt who rules over the Halidom of Ylisse. She is the sister of Chrom and Lissa. Appears in Fire Emblem Awakening.

Emmeryn - Gentle Heart
Sadly, Emmeryn's fractured memory never fully returned. She took refuge in Ferox after the war and started anew as an ordinary woman--a life that one can hope held fewer pressures than her exalted one.

Emmeryn and Robin
Many wrote of Robin's legendary exploits, but accounts of his origins and character varied. Scholars, poets, and bards agreed on one thing alone--he loved his wife, Emmeryn, above all else.

Emmeryn is illustrated in the trading card game Fire Emblem Cipher with the following cards: 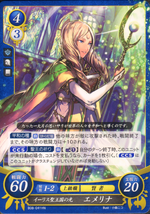 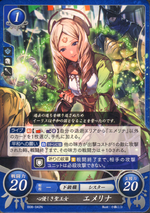 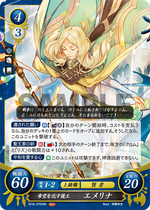