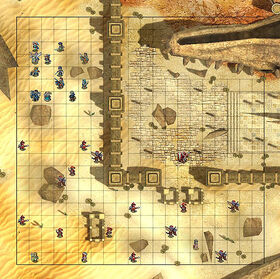 Like the previous map, this chapter takes place on a heavily sand based map. You will need to pair up most of your units with either Sumia or Cordelia due to their huge movement range and freedom of terrain movement penalties. Ricken, Miriel, and Lissa also prove to be effective on this map because of their Mage status. Once your army can approach the turn on the southwestern portion of the map, they will have free movement for the southern strip of the map.

You will need to get to Libra as quickly as possible because he is surrounded by numerous enemies, as well as the fact that he could potentially kill Tharja in lower difficulties if you do not recruit him fast enough. Though he can dispatch most with his Killer Axe, it is a weapon worth preserving for better, more powerful axe users like Vaike. Also, caution should be expressed on Lunatic+ because enemies will pack skills that can kill him before you can recruit him. Have Chrom Pair Up with a mage or flier unit to help him get across the sands faster. Alternatively, if you have a Rescue staff lying around from the last chapter, you can use that with a unit that can use staves with a high Magic stat (as Rescue's range is based on their magic stat/2) to warp him to you instantly. Regardless of the selection you pick, on Libra's turn he will automatically talk to Chrom if you haven't done so already.

Tharja may be a bit trickier to obtain, as she is an enemy unit which will attack yours if they are within her attacking range. She has a Nosferatu and Elthunder tome as her starting items, and will most likely use the former when attacking you. If Chrom hasn't been promoted yet (since all non-mounted classes have a move range of 5), have someone tank her hits and bring Chrom within her range so you can recruit her. Alternatively, you could have Chrom pair up with a flying unit as all flying units have a base movement range of 7, allowing you to wait one space out of her attack range, then recruit her next turn. Make sure the unit cannot retaliate back, otherwise they may kill her by accident.

After all the enemies have been killed, Campari should be the only enemy left. As a General, he has very high DEF, so bring an anti-armor weapon (Armorslayer, Hammer or Rapier if you have one). Although you could use a mage to take advantage of his low Resistance, if they do not have enough Defense he can deal heavy damage to them. Once Campari dies, the chapter is completed.

(On Hard mode a Soldier and a Mage spawn from the forts near the General as well.)