Chapter 5: Flight! (fought in Chapter 21: Without a King & joins in Chapter 28: Twisted Tower, Path of Radiance)

Jackie Lastra
[view]
“My only wish was to be beside the one I love. If that is not to be, then it matters not what happens to me.”
—Ena, in Chapter 27 of Path of Radiance

Ena is a playable character from Fire Emblem: Path of Radiance and Fire Emblem: Radiant Dawn. Despite being technically classified as a Red Dragon, her scales are pink in color, and she is characterized by relatively high magic stats. This is a result of the White Dragon blood that she has received from her grandfather, Nasir.

Ena makes her first appearance at the end of Chapter 5 as the personal tactician of Petrine, where she informs the latter that Elincia is most likely to seek refuge in Gallia.

Ena reappears at the end of Chapter 20, where she is shocked to learn that she has been ordered to lead the Daein forces stationed within Daein Keep. Denied an audience with Mad King Ashnard, Ena is forced to set out to fulfil the duties imposed on her. The Black Knight then enters the scene, notifying Ena to head out for the eastern gate of Daein Keep in order to meet an unnamed visitor.

The visitor turns out to be Nasir, who presents Ena with Lehran's Medallion. She takes notice of the medallion's heavy weight, and considers the possibility that it is under the influence of an "evil god". When questioned on her next course of action, Ena resignedly reveals that she is unable to defect from Ashnard's army due to an enigmatic desire to return to an unknown individual's side.

In the next chapter, Ena accurately surmises that Ashnard will not be "all that upset" if she fails to hold Daein Keep due to him not holding a strong attachment to Daein. Alongside Kasatai, she prepares to engage Ike's army in battle. It is through this battle that Ena's identity as a Dragon Laguz is unveiled after she transforms for the sake of battle. Ena's confidence in her power proves, however, to be unfounded, as she is felled by Ike's forces. She then proceeds to flee from the throne room with the aid of Nasir, who prevents Ike from chasing after her.

If the second scenario is activated, Ena later regains consciousness in the encampment of Ike's forces. Ike informs her that Nasir has been killed by the impact of the castle falling on him, to which she grieves briefly before confessing her true identity as the granddaughter of Nasir. As a means to repay her debt to Ike, she then offers to provide information on the location in which Leanne is held captive.

In the next chapter, Ena leads Ike's forces to Gritnea Tower to save Leanne. When Ranulf later notices something amiss about the air around the tower, Ena reveals that the tower holds the Feral Ones, and goes on to provide rough estimates of the number and type of Feral Ones it holds. When the ensuing battle reaches its conclusion and Leanne has been saved, Ena, alongside Ike and Ranulf, enters the tower, where they are greeted with the tortured corpses of numerous laguz who have been twisted and warped beyond recognition. Here, Ena brings to light the fact that Ashnard considers laguz to be tools in service to his own mad ends, using them to determine whether the powerful beorc he calls to his cause are worthy of his recognition. She goes on to concede a rumor she has heard of scholars being ordered to "perform all kinds of experiments" and use "elixirs to drive them mad and keep them locked in their changed states". It is at this point that she makes an unknown realisation that hardens her resolve to commit herself to aid Ike's army.

When Ashnard is later slain in the Endgame, Ena sprints towards his wyvern mount and kneels down beside its head before gently cradling it. Nasir then reveals that the wyvern mount is Ena's mate, and that he has finally regained his sanity at death's door. Leanne and Reyson make the joint decision to sing the Galdr of Rebirth in order to fully restore the soul of the wyvern mount. As the song reaches its conclusion, the "wyvern" is revealed to be Rajaion, King Dheginsea's first son and the original crown prince of Goldoa. Shortly after an emotional exchange shared between the two lovers, Rajaion passes away peacefully in Ena's warm embrace.

After Elincia is crowned the next Queen of Crimea, Ena departs from Crimea with Nasir, taking Rajaion's body back with them to give it a proper funeral.

Ena appears before the start of Chapter 4-E1, where she stumbles upon Kurthnaga speaking to Almedha. A tense exchange between Ena and Almedha ensues, with the latter, distraught with guilt over being indirectly responsible for Rajaion's death, attempts to convince Ena to hate her. Ena calmly refuses Almedha's request, curtly stating that Rajaion had willingly sacrificed himself to protect Almedha, and she thus has no wish to blame her for his death. Ena then announces the arrival of Nasir, and after sharing a tense and heated conversation with him, Ena, alongside Kurthnaga, reaffirms her desire to reverse Ashera's judgment, even if it means turning her back on their fellow tribe members.

After Ashera is finally defeated, Ena returns to Goldoa and gives birth to Rajaion's child. The entire country is said to rejoice at this revelation, as this event marks the birth of the first dragon laguz in over a century.

Ena will join at the beginning of Chapter 28, only if Ike fails to defeat the Black Knight in Chapter 27. If Ike succeeds in defeating the Black Knight, Ena will accompany the army as an NPC unit, with Nasir joining in her stead.

Ena's stats are rather low, and thus, can be shown to be overshadowed by her grandfather, Nasir. Although her skill and speed stats grow rather quickly, her strength is much lower than the enemy Red Dragons that fight for the opponent and she only has a couple of chapters to grow regardless. However, Ena can still be of use, as she has excellent bulk, and can still deal good damage to regular units like Paladins and Halberdiers. Overall, Ena's stats are a little low, and can be a bit of a liability, but she is still usable for the two chapters she is available for.

Ena may be considered to be one of the weakest characters to enter the Tower of Guidance, owing to her lack of versatility as a Red Dragon. However, she does serve as a useful support character, resulting from possessing skills such as Blood Tide and Boon. Boon is especially useful in Rebirth 1, where the bosses have the ability to Silence multiple units at any one given time.

Furthermore, as Ena possesses incredibly high Magic, it is thus recommended to fill her inventory with Reaper Cards to exploit this trait of hers.

Autumn Tactician
A dragon laguz from Goldoa. She is considering the best approach to take in order to liven up harvest festivities. Appears in Fire Emblem: Radiant Dawn.

Ena: Urrr... Only a...little farther...and I will be with him...
Ike: Ena! You can't go on with that wound! You must retreat!
Ena: No... No! Please, General Ike! Please let me go...
Ike: If you were thinking clearly, you'd see that you've become a burden.
Ena: Oh!
Ike: You came here because you have something you must do, correct? Please trust us, and let us help you.
Ena: ...Very well...

Ena returned home and gave birth to her lost fiance's child. Goldoa rejoiced at the first dragon birth in centuries.

Ena is illustrated in the trading card game Fire Emblem Cipher with the following card: 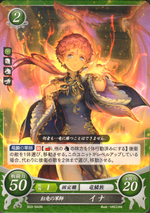 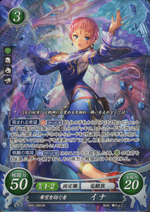 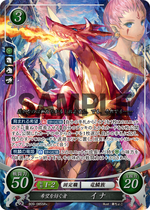 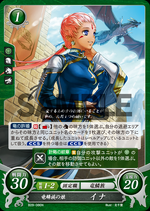