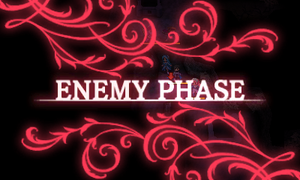 Therefore, the enemy phase allows the player to deal damage to many opponents in a single turn. It can be exploited by placing a single, powerful unit within range of large groups of weak enemies so that all of them can be dealt with at once. Such a strategy is vastly preferable to expending the turns of all of the player's units just to take out a single horde of enemies. This tactic is often called juggernauting, and it can sometimes be made possible for the course of an entire game by funneling EXP into a single player unit and "solo-ing" the game.

Since enemies tend to target opponents that cannot retaliate, units that can wield common 1-2 range weapons such as Javelins and Hand Axes are best suited for juggernauting, as they can counterattack against both units at melee range and units like archers and mages. Since sword-locked units usually only have access to a few, rare 1-2 weapons such as the Light Brand (which tends to deal low damage at 2-range), they are not often used for juggernauting. Archers, often being locked at 2-range, face the same issue.

The effectiveness of juggernauting varies between the series' entries; usually, it depends on enemy density, or the amount of enemies present in each chapter relative to their size. Games with high enemy densities tend to have low enemy quality, so juggernauting is a go-to strategy for clearing these games' chapters efficiently. For example, Fire Emblem: The Blazing Blade is considered to have a high enemy density and low enemy quality; therefore, enemy phase strategies are preferred in most of its chapters. Games that have a high enemy density and low enemy phase quality can sometimes be referred to as enemy phase-centric, or enemy phase-focused. The aforementioned sword-users and bow-users are at their worst in these situations.