-
[view]
“Corpses animated by evil power. They are slow moving, but their talons are deadly.”
—In-game description from Awakening.

The Entombed (マミー Mamī, lit. Mummy) is an enemy-only Monster class that is first introduced in Fire Emblem Gaiden. Taking the form of resurrected mummified corpses, the Entombed commonly use their decayed claws and talons to rend the flesh of their foes.

The Entombed are usually considered to be the promoted versions of Revenants and are known for giving a lot of Experience Points when defeated.

In their original inception in Fire Emblem Gaiden, Mummies use their claws to strike their foes with a relentless lack of mercy. They have the same stats as zombies but give out significantly more experience when defeated

In TearRing Saga: Utna Heroes Saga, the Entombed are referred to as Great Mummies (グレイスマミー Gureisu mamī). Their promoted forms are the Zombie class, though Great Mummies give out more exp when defeated. Great Mummies use their fists to clobber their foes. Their fists are classified as Axes in this game. They can be summoned with the Zombie Staff by Staff users with the Summon skill.

In The Sacred Stones, the Entombed use the same set of weapons that their weaker Revenant cousins use; Rotten Claws, Fetid Claws and Lethal Talons.

In Awakening, the Entombed are outfitted with Blighted Claws instead.

The stats boasted by Entombed are only slightly better than Revenants; more health and strength, but barely any defense and resistance. Throughout the games they appear in, Entombed are also blessed by unusually high Luck compared to other monsters, making the chances of a critical hit low if not supported and given high critical weapons.

Compared to other monsters, Entombed are extremely rare to find; at most, a player may find two or three Entombed in a battle. Defeating them will give plenty of experience, especially among lower leveled units.

In Awakening, some of the Entombed's number serve as Risen. Some Entombed have various skills tagged to them, notably those learned by Dark Mages and Sorcerers. The Army of Shadow, a bonus DLC Double Duel Team, also consists of six very powerful Entombed.

Concept artwork of the Entombed class from Awakening. 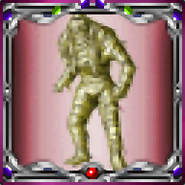 Generic class portrait of the Great Mummy from TearRing Saga.

Generic class portrait of the Entombed class from The Sacred Stones.

Generic class portrait of an Entombed from Awakening. 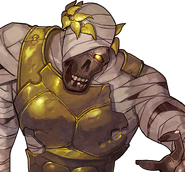 Generic class portrait of an Entombed from Fire Emblem Echoes: Shadows of Valentia. 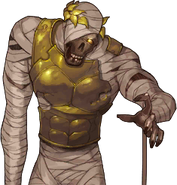 Generic class portrait of an Entombed from Echoes: Shadows of Valentia.

Village sprite of an Entombed from Echoes: Shadows of Valentia.

Battle model of the Great Mummy class from TearRing Saga.

Attack animation of the Entombed class from The Sacred Stones.

Battle model of an Entombed from Echoes: Shadows of Valentia.

Map sprite of the Mummy class from Gaiden.

Map sprite of the Great Mummy class from TearRing Saga.

Map sprite of the Entombed class from The Sacred Stones.