View source
watch 46:18
'Fire Emblem: Path of Radiance' - Chapter 19
Do you like this video?
Play Sound 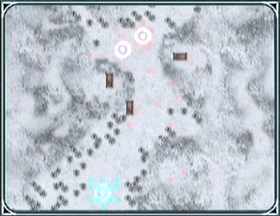 Shinon (In Chapter 18 talk to him with Rolf, then defeat him with Ike)

Chapter script
[view]
“Princess Elincia's newly-formed Crimean army, with Ike as its commander, marches to Tor Garen and claims its first victory. Tor Garen is a vast wall guarding Daein's border. Manned by battalions of well-trained soldiers, it was long thought impenetrable. Yet the strength of the Crimean army under General Ike's leadership far outstrips Daein's expectations, and Tor Garen falls. Learning of Gallia's increasing interest in the war, Ike wastes no time ordering his troops further into the heart of Daein. The gears of history, which had come to a halt with the fall of Crimea, slowly creak to life once more...”
—Opening Narration

Entrusted is the 19th Chapter of Fire Emblem: Path of Radiance and is notable for having Naesala as an actual enemy unit, instead of an observer like in earlier chapters. This is also the first chapter where Reyson, Ulki, and Janaff become units available at the base, as well as Shinon if his requirements were met. To clear this chapter, you have to defeat the boss, Homasa, who has a short battle conversation with Stefan, Zihark, and Ike.

This chapter is one of the harder ones in the game, as the 3 ballistae are a hassle to deal with, combined with the fact that two of them are on hills that can be accessed only with flying units. This presents a conundrum, as the ballistae and the archer's arrows have effectiveness against flyers. Thankfully, there are no mages to aggravate your fliers or laguz further. All in all, this chapter is not friendly to your flying units.

Naesala and his ravens can be annoying to deal with as well because even if Naesala is weaker than Tibarn, he is still a powerful enemy unit, able to easily double and kill most of your units. He comes with both Vantage and Vortex, further making him more difficult to kill. If you want to kill him, you first have to lure him out with a speedy unit and then kill him with your archers, mages, and fliers. However, an easier and more popular way of dealing with Naesala is to talk to him with Ulki or Janaff and then he will immediately move to where Reyson is, ignoring your other units, and talk with the heron prince. Reyson will then forgive Naesala under the conditions that Naesala and his troops leave the battlefield, and that Naesala never "take arms against your fellow laguz." Naesala honors the first request and leaves the battlefield with any surviving ravens, which satisfies Reyson. Therefore, it is essential that Reyson and at least one of the hawks be deployed, so that you do not have to face Naesala. As Vortex is pretty much wind magic, be careful that your hawk is in human form, so that Vortex is not super effective against him. Naesala will also always attack if he gets the chance, so don't assume that if you deploy a unit within his range he will stop to talk.

It is recommended to have a balanced mix of ranged units and melee units, as your wind mages and archers can easily take care of the ravens, especially the two on the hill just to the right of where you start. Get rid of these two right away so you can put your mind at ease. A couple of beast laguz deployed won't hurt too much either. It is recommended that if you deploy laguz though, to equip the full guard that you acquired from a chest in chapter 16 or the beorcguard that Lethe comes with to lower super effective damage. A good idea to deal with ballisticians is to have somebody with Provoke (such as Shinon if he was recruited in the previous chapter) wait towards the back of the first ballistician's range, as the ballistician will attack him only (unless Reyson or a healer is within the ballistician's range), and then heal the attacked person (making sure the healer stays out of range of the ballistician). Each ballista has only five shots, a boon for your army unless you wanted to use them, although they're not very useful for you in the first place. Next to the first ballistician is a warrior with a killer axe, so make sure that if you have any units within that warrior's range to have high HP and defense preferably. If you have somebody with both Vantage and Wrath, this can counter the warrior's killer axe. Next, use a paladin or really speedy unit to take care of the first ballistician and then move back to safety as any space around the first ballistician (except any in front and to the right of the archer manning the ballista) is within Naesala's range, so unless you have a strong, speedy unit and your hawk nearby, Naesala will only be a hassle and kill most of your units.

If you would rather take the offensive and deal with the ravens within a few turns, it can be done with certain available units. One of the benefits is that you will get more bonus experience for the ravens survival. You will need a strong Bow-wielding Paladin (or Sniper), a few other strong units with 8 or more movement, either a strong Falcon Knight or a strong Wyvern Lord, either Ulki or Janaff, Reyson, and a unit with at least 8 movement who can take at least two shots from Naesala's Vortex. Reyson can allow a Paladin with a long range weapon (or a sniper who gets shoved once after Reyson chants at the edge of the other enemy units' ranges) to reach the first ballista and kill the user. A few other units with high movement (8 or more) should also advance to help the bow wielder get away. A strong Falcon Knight or Wyvern Lord will wait near the left-side hill just outside of the range of the ravens and wyverns. That unit must also have the Full Guard. The unit who will take the hits from Naesala should stay with the bow-wielder and that group. The rest of the army, including Ulki/Janaff and Reyson, should stay back. On the next turn, the Flying unit should be able to kill the ballista user on the hill, then get out of the range of the wyverns and Naesala. The group that advanced should kill as many enemy units as possible, then retreat as far as possible. The unit who will take Naesala's hits should move just in range of his attacks (he will have to use Vortex). It may help to leave one mounted unit behind with either a bow or no weapon to lure the myrmidons away from the unit luring Naesala. During the enemy phase, Naesala will advance and attack. During the next player phase, the unit must retreat towards the main group and be on the edge of Naesala's range. The unit with the bow must be able to break out of the myrmidons and get out of Naesala's range. Naesala will advance and attack the original decoy again. Now Ulki/Janaff should be able to reach Naesala and speak with him. Put Reyson in Naesala's range after Ulki/Janaff speaks to him. Naesala is no longer a threat. Now move your flyer (and any others who may not have the Full Guard) into the range of the two Wyverns. The rest of your units can rush forward and kill any Daein soldiers who may try to kill Naesala's ravens. Any Daein soldiers will attack if your units are in their range. This is a good thing. Naesala will go to Reyson and talk to him. He will also give Reyson the Knight Ring (non-mounted units can use the rest of their movement as if they were mounted). Naesala will retreat and all of his ravens will become "Other" units. Any Daein soldiers who were unable to reach your units will go after the ravens (less bonus exp if they die). That is why it was important to move into their range. They will attack before Naesala moves if they can. After Naesala leaves, your top priority is to protect the ravens until they can reach the left or right side of the map to escape. After that, go for Homasa and any other soldiers that might still be around. Send the flying unit with the Full Guard to take out the third ballista first. If it all worked out, every raven should have escaped unharmed. Drawing out the wyverns after the initial talk with Naesala is very important to protect them. The ballista users can also be problematic if left alone. It's a tricky plan and it demands certain units, but if you like Bonus Experience, then it's worth it.

A lone ballistician will be on the second hill, with a Wyvern Lord and Wyvern Rider behind the hill, which will only move if a unit's in range of attack. They are accompanied by Naesala and three other ravens. During the first few turns, the myrmidons in front of Homasa will move to try and attack your units. One of them has a longsword, so be aware of this. A soldier and two ravens toward the east will not move unless they are transformed or attacked. The final ballistician is on a hill to the northeast accompanied by a fighter with a short axe. Once the myrmidons, ravens, and wyverns are gone, Homasa is only accompanied by two cavaliers and a priest with a mend staff. Homasa isn't too strong (except against fliers with his sonic sword), so he shouldn't be too difficult to defeat.

In easy mode and normal mode, there are no extra reinforcements.