Chapter 12: Birds of a Feather

Ephidel is an enemy in Fire Emblem: The Blazing Blade. He is a morph created by Nergal through magical means. He is rarely seen to express emotion, but it is likely that he is among the morphs that can not feel emotion, and can only fake it.

He is sent by Nergal to Lycia, with the primary goal of instigating a rebellion against Ostia as the ruling territory of the Lycian League by making false promises to certain Marquesses and corrupting them. He then kills them when they can't stop Eliwood's army. When Eliwood secures Laus Castle, Ephidel goes back to Valor, The Dread Isle, for further orders, and catches the Ostian spy Leila, ordering Jaffar to kill her. When Eliwood arrives at the Dragon's Gate, he then appears to abduct Ninian once again, ordering Darin, Marquess Laus, to do battle with Eliwood's group. After these events, he is last seen when a controlled Ninian summons a dragon from the Dragon's Gate, but when Nils manages to snap her back to her senses, Ninian abruptly closes the gate on the dragon, resulting in fiery explosion where Ephidel and Nergal are standing. Ephidel cries out to Nergal, but to no avail, as Ephidel is left to die while Nergal flees.

Though Ephidel had a hand in instigating rebellion in Lycia, he is never seen in combat (the only exception is him taking out Lord Helman in a dialogue scene) in the game and does not even have internal battle data, though he uses the sprite of a Sage.

As a morph, Ephidel's reason for being is to serve the ambitions of his creator, Nergal. He is cold and ruthless, with little else that drives him other than seeing Nergal's plans come to fruition.

Ephidel is illustrated in the trading card game Fire Emblem Cipher with the following cards: 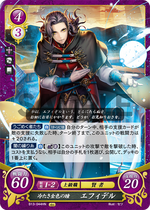 Ephidel as a Sage in Fire Emblem 0 (Cipher).

Ephidel's portrait in The Blazing Blade.