Prologue: The Fall of Renais (The Sacred Stones)

Greg Chun
[view]
“Trust me. I don't pick fights I can't win.”
—Ephraim citing his motto to Kyle and Forde before charging Renvall.

Ephraim is a playable character and a protagonist in Fire Emblem: The Sacred Stones. He is the crown prince of Renais and Eirika's twin brother. He is a headstrong and determined man whose skill with a Lance is unsurpassed by any other in his country, having been taught by Duessel. He has a semi-friendly rivalry with Prince Innes of Frelia and is also good friends with Prince Lyon of Grado. He wears the Solar Brace which is one of a pair of bracelets that together grant access to Renais' Sacred Stone.

In his path, Ephraim first approaches Fort Rigwald, with its defenders attempting to hold out a Frelian siege. After rescuing Tana whom was captured while looking for his group. Ephraim and his forces kill the commander inside, forcing the garrison to surrender. Upon interrogating one of the prisoners, he learns about Duessel's reaction to the war, and heads towards Bethroen to assist him.

After dispatching her, he finally arrives at Grado, where he besieges the castle, killing Vigarde. He later reunites with his sister in Jehanna, and takes the throne back from Orson, before heading to Rasuten and finally Darkling Woods to stop Fomortiis from destroying Magvel. After Fomortiis is destroyed, he returns to Renais and rebuilds the nation with Eirika. Marrying Tana or L'Arachel if he has an A-Rank support with either of them and uniting Renais with Frelia or Rausten respectively.

Ephraim is very brave and courageous. He is revered by his comrades as a brave leader, as well as someone who is renowned for his battle prowess, gift for strategy, and unwavering determination. He is shown to have a very straight-to-the-point attitude, and dislikes wasting time on anything that strays from whatever goal is at hand. He even explains to Eirika that he also has a calling to battle, and it is something he is not sure he can control. One of Ephraim's dreams included becoming a mercenary in order to travel the world. But, Ephraim also puts his responsibility and kingdom first despite this longing for battle, which means he was never able to achieve this dream of his even after the end of the game.

Although he is not very knowledgeable in history, he is viewed as a suited king to the throne by Duessel and others. He is passionate about his goals, and also very caring about others, such as how he very actively wants to protect his twin sister Eirika.

Outside of battle, Ephraim is shown to be a kind, strong, and mature person despite being rather young. He takes criticism rather well, even if he disagrees with what is being said. However, Ephraim seems to struggle with communication, as well as consideration of others, due to the fact that he was raised to be a distant prince, only ever opening up to Eirika, Duessel, and his retainers; he states he could not afford to feel real affection toward anyone because of this. Ephraim also explains in his Level 40 conversation in Fire Emblem Heroes, that he is always striving to strengthen these lacking qualities, especially after losing Lyon, who he refers to as 'a good friend of his' in his dialogue. Ephraim can come off as aloof at times because of this, and even a bit shy, which is shown in his support conversations with L'Arachel and Tana, which portrays his inability to hold a conversation with them well.

Ephraim's biggest flaw is his overconfidence. Though he picks and chooses battles he is sure to win, he sometimes loses sight of the bigger picture, focusing on victory at all costs. This causes him to abandon Renais at its time of need, allowing Orson to take over as a despot and causing the citizens to suffer. Another example of this behavior is shown when he, Orson, Forde, and Kyle storm Fort Renvall by themselves, with Forde and Kyle questioning Ephraim's sanity for directing such an order at first.

Ephraim is one of the two Lords in the game, and he will become the main lord of the storyline if his story is taken at the route split. Unlike his sister, Eirika, who joins with very low base stats, Ephraim's primary stats are fantastic for his join time and level, and he has among the best growths in the game all around. He is also locked to a far better weapon type than Eirika, who has Swords, as Lances have higher damage, a reliable ranged attack option, and are less susceptible to weapon triangle disadvantage against the majority of enemies that use them as well.

Ephraim's main weakness is his late promotion, his lance lock, and lack of a mount until he promotes. He may fall behind any mounted units in the player's army up until that point and will require ferrying to remain on the front lines. He is also not present at all in Eirika's route until he meets back up with her in Chapter 15, leaving him with very few chapters of availability. When engaging Axe using enemies, he is at weapon triangle disadvantage unless he equips an Axereaver. He also has fairly low stat caps, though during the main campaign this does not come into play to any notable degree. These issues do not stop him from being one of the strongest Lords in the Game Boy Advance titles, and perhaps even the series, especially once he promotes.

Restoration Lord
Prince of Renais. Eirika's twin. Cares deeply for his sister. His confidence has sometimes put him in danger. Appears in Fire Emblem: The Sacred Stones.

Legendary Lord
Prince of Renais. Eirika's twin. It's said he destroyed the Demon King of old and saved the world. Appears in Fire Emblem: The Sacred Stones.

Sacred Twin Lord
Prince of Renais who protects his kingdom in place of his deceased father, King Fado. He's taken to using one of the Sacred Twins relics from Grado—the black axe Garm. Appears in Fire Emblem: The Sacred Stones.

“Forgive me, Eirika.”
—Ephraim's death/game over quote in The Sacred Stones.

“Is everyone ready? We're going to win.”
—Ephraim's quote from Final Chapter in The Sacred Stones.

Ephraim, Restoration King (碧空の勇王 Hekikū no Yūō lit. Brave King of the Clear Sky)
"Busy days awaited him upon his return to Renais. He oversaw the rebuilding not only of his country but also of the entire continent of Magvel. His work was difficult, but his success made him a legend."

A Support with Tana
"Once Renais was stable again, Ephraim and Tana were wed. Innes protested vocally, but when he saw how happy Tana was, he gave the marriage his blessings. Renais and Frelia are now bound by blood as well as friendship."

A Support with Eirika
"Busy days awaited Eirika and Ephraim as they struggled to rebuild Renais. Their work gave new hope to those ravaged by the war, and with Eirika's constant help, Ephraim grew to be a trusted and honorable king."

A Support with L'Arachel
"Ephraim and L'Arachel each returned home after the war, but L'Arachel visited Renais often. Over time, the two were wed. Their marriage threw Rausten into turmoil, but L'Arachel's self-centeredness carried the day."

A Support with Myrrh
"After the war, Ephraim returned to Renais and Myrrh to Darkling Woods. They both turned their attention to their respective duties but never forgot one another. Though Myrrh never again left Darkling Woods, Ephraim often visited her."

Ephraim is illustrated in the trading card game Fire Emblem Cipher with the following cards: 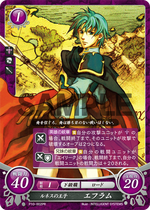 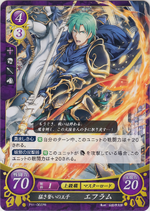 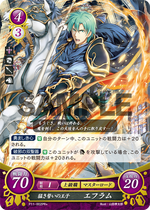 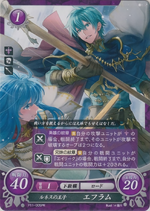 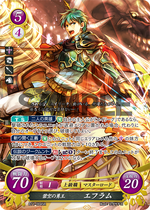 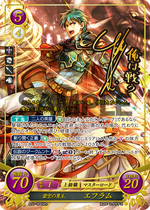 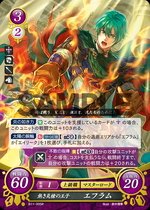 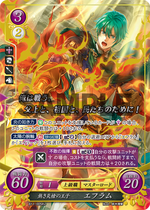 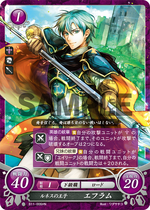 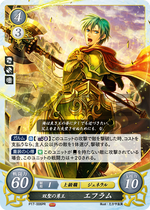 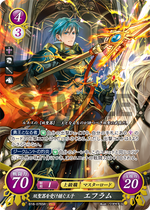 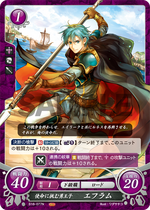