Equus (ズイーベン Zuīben, Sieben in the Japanese version) is one of the twelve Deadlords, and appears in Fire Emblem: Genealogy of the Holy War and Fire Emblem Awakening.

In Fire Emblem: Genealogy of the Holy War, little is mentioned about the Deadlords, but they are all fought in the Final Chapter near Belhalla and eventually defeated, including Equus himself. Equus is not fought in Fire Emblem: Thracia 776.

Equus is the easiest to defeat out of all the Deadlords, as he utilizes the worst magic type in the game, alongside having a relatively low Attack Speed, a result of him wielding the cumbersome Bolganone tome. He should be defeated by practically any character with ease. However, don't completely let your guard down, as a Bolganone Critical hits for 86 damage, and due to Resistance being extremely low on physical units, poses a real risk of one-shotting your units.

The Deadlords' names are Latin words for the animals of the Chinese zodiac. The zodiac's seventh sign is the horse, which in Latin is equus.

Equus' Japanese name, Sieben, is the German word for the number 7. 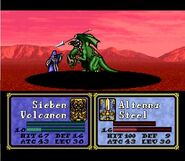