G. K. Bowes
[view]
“You know that Silessean royalty claims direct lineage with the Wind God Forseti. That means you are the only one capable of succession. Only you can preserve the Silessean lineage. And the people wish it of you as well. Lewyn, the queen was in tears when I left. Please... Sniff... just come back with me.”
—Erinys talking to Lewyn in Genealogy of the Holy War

Erinys (Fury in the Super Tactics Book) is a character from Fire Emblem: Genealogy of the Holy War.

Erinys is 17 years old, as revealed in the Mitsuki Oosawa manga.

Erinys is the only playable female character in Sigurd's tale who is not of noble heritage or holy crusader descent. When paired up, Erinys's children will be Fee and Ced.

Erinys is one of the Four Heavenly Knights of Silesse, and is the younger sister of the squad's captain, Annand. Both Erinys and her sister are childhood friends and retainers to the wayward Prince Lewyn of Silesse. She leads a squad towards Sigurd's army while searching for Lewyn, having been deceived that Lewyn had been kidnapped by Sigurd.

While Erinys does not have a fixed partner in Genealogy of the Holy War, Erinys is canonically married to Lewyn in Thracia 776, and has bore two children with him: Ced and Fee. After the Battle of Belhalla, Lahna dies, leaving Erinys as the Queen of Silesse while her husband has gone missing in the aftermath. She reigns as best she can while awaiting her husband's return to the country, but eventually succumbs to an unknown illness.

Erinys sports a sweet, polite and honest personality. In the past, she has admitted to being a crybaby with Díthorba affirming this. Ced mentions that her daughter Fee resembles her not only in appearance, but also in personality, suggesting that Erinys "[never] could turn a blind eye when somebody was in trouble."

She is oblivious to the affections of her suitors. This can be seen when she is paired up with Lewyn, when he mentions that he feels that she is better looking than her sister is. While Lewyn meant for this to express his love for her, she did not pick up on the statement's subtlties until he flat out confesses to her.

Erinys is the first flying unit that can be recruited in Genealogy of the Holy War, and the only flying unit that can be recruited in the first generation. As the only flying unit, she fulfills an important role in Sigurd's army. She joins you late in Chapter 2 with some pretty strong starting stats. She, unfortunately, comes with the worst growths in the entire game (tied with Sylvia and Hannibal), though her strong base stats will ensure that this is not a crippling flaw. Her main problems are her relatively low Strength and her below average durability. There are some options to remedy this. She is a good candidate for a Power Ring to solidify her offense or a Shield Ring to shore up her defenses. Alternatively, you could have Finn sell her his Brave Lance before he leaves at the end of Chapter 3. This is particularly good option if Finn is a father, as he will lose the Brave Lance no matter what. However, it may be best to leave the Brave Lance with Finn so he can more effectively defend Leif and Nanna when he rejoins you in Chapter 7. Erinys is a great candidate for the Life Bracelet as she is frequently by herself, and far away from any healers.

Despite some minor stat-related flaws, Erinys more than makes up for it in her battlefield versatility. Most often, Erinys will be the unit tasked with saving burning villages since she can usually get there the fastest. Additionally, she can act as a decoy to split up armies or otherwise change the movement patterns of enemy armies. She can also be used to attract the attention of Reptor's army, forcing them to make their move as early as possible. Another option is to have her engage in guerilla tactics by repeatedly attacking an enemy army, then retreat to the safety of mountainous or densely forested areas and repeat the process. After she Promotes, she also has the option of acting as a highly mobile healer.

Erinys can be a little awkward to pair for because her children are a bit mismatched in what they want for stats. Her daughter, Fee, is a Pegasus Knight that will generally want more Strength and moderate Magic. Her son, Ced, is a Pre-Promoted Sage that will want Magic. Luckily, Ced has strong enough base stats that he will turn out well regardless of his father. If his father is more physically oriented with a poor Magic stat, the pairing will usually still turn out fine if he inherits a Magic Ring.

Erinys is best paired up with Lewyn. Claud, Azelle, Naoise, and Alec are decent choices with flaws. The rest should be avoided due to lack of inheritable skills, poor stat fits for the children, a lack of inheritable weapons, or a combination of all of those.

In Chapter 2, if Lewyn speaks to Erinys, he will recruit her.

In Chapter 2, Erinys may speak to Sigurd, but nothing will result of it.

In Chapter 4, before Tófa Castle is captured, if neither Sylvia, Lewyn, nor Erinys has a lover, position Sylvia adjacent to Erinys. This will trigger a conversation in which Sylvia will gain 50 love points with Lewyn, and Erinys gaining 25 love points with him.

In Chapter 4, if neither Erinys nor Lewyn has a lover, after Silesse Castle is captured, Lewyn may speak to Erinys, resulting in them falling in love instantly.

In Chapter 5, after Phinora Castle is captured, if Erinys is in love with either Lewyn, Arden or Naoise, she may speak to her lover, but nothing will result of it.

Earnest Knight
One of the Four Heavenly Knights of Silesse and Annand's younger sister. Has a serious outlook that Prince Lewyn teases her about. Appears in Fire Emblem: Genealogy of the Holy War.

Erinys is a Lance Flying unit of which there are a sizeable amount of units who share this combination already in game and is one of the strongest overall since she has a combination of high neutral Atk and Spd allowing her to dish out incredible damage on stats alone. She has moderate physical bulk for a flier as well at 71 physical bulk but her magical bulk is on the lower end scoring 62 on her 23 Res. While she brings nothing particularly new, her worth, like many other units, are defined by her unique lance.
Silesse Frost gives Erinys an innate Atk+3 boost to bring her Atk to a powerful neutral 56. If her foe is over 50% HP, she gains an Atk/Spd+6 increase. She also has another effect which requires her to be near her Ally Support as doing so will give her an second attack, thus it is possible for her to quad attack an opponent. It also makes Clive, Mathilda, or Male Corrin valuable partners to her as their refined weapons can give her additional in-combat stats.
Harsh Command+ turns any of the penalties on the ally she uses this assist skill on into bonuses and negates any negative statuses that can be inflicted on that unit. B Duel Flying 4 gives her an innate HP+5 and Atk/Spd/Def/Res+2 and helps with scoring in the Arenas. The combination of stats and scoring make it great for all modes as the flat boost to all five stats can have an impact in combat. Chill Attack Speed inflicts Atk/Spd-5 on the enemy with the highest sum of those stats, thus making it mainly easier for her to score her quad attacks on more enemies. Attack Defense Rein inflicts Atk/Def-4 on foes within two spaces of Erinys during combat even if they are not battling her.

Erinys is extremely powerful in the player's hands since she can take full advantage of the secondary effect of Silesse Frost, but in the enemy AI's hands, she does not have access to her double attack ability. A strong enough green wall can ward of the brunt of her attacks such as Brave Edelgard, Mamori, or Rinkah. Her Flier status also makes her vulnerable to Bows since they deal effective damage to her.

Erinys's only empty skill is her Special, of which Moonbow works great to ignore some of the physically bulkier units' Def that she may face. She can consider Reposition instead of Harsh Command+ due to the sheer power and utility of this Assist skill. If Arena scoring is not important, Skill A can be filled with more aggressive skills like Swift Sparrow or Sturdy Impact. Skill B can be replaced with Desperation or Dive-Bomb sync well with her aggressive kit to ensure that she launches all four of her attacks before her opponent has a chance to retaliate. Skill C can be filled with other useful Flier team skills such as Hone/Fortify/Goad Fliers, Guidance/Flier Guidance, and Air Orders/Ground Orders

“Knights of Grannvale, return Prince Lewyn to us!!”
—Erinys

Erinys is illustrated in the trading card game with the following cards: 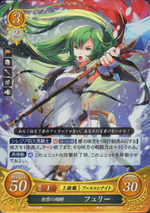 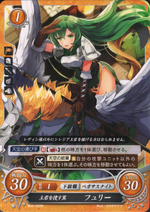 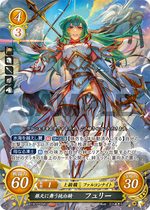 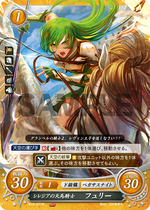 The Erinyes, singular Erinys, are goddesses of vengeance from Greek mythology, said to have been born of Uranus's body after he was slain by his son Kronos. Normally residing in the underworld, the Erinyes ascended to the earth to pursue the wicked. They are also known as Furies, the origin of Erinys's Japanese name.