View source
watch 13:10
'Fire Emblem: The Sacred Stones' - Chapter 1
Do you like this video?
Play Sound 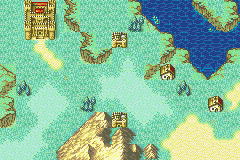 Chapter script
[view]
“But we can’t just ignore this… You were there when Renais was invaded… You saw what I saw. You saw how the people suffered at the hands of Grado’s soldiers. Homes were destroyed, possessions stolen, women kidnapped… Anyone who resisted was executed without question, without hesitation.”
—Eirika, telling Seth why they should help.

Escape! is Chapter 1 in Fire Emblem: The Sacred Stones.