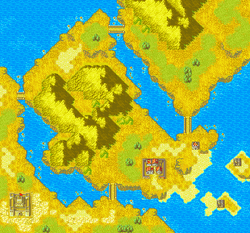 Chapter script
[view]
“The Lycia Alliance Army took in Elffin as a tactician. Following his advice, Roy led his forces south toward the isle of Caldonia. Caldonia was one of the three largest islands of the Western Isles. The other two were Fibernia and Dia. Located on Caldonia was Castle Edina. Here, men from all over the Isles were rounded up and locked in prison cells to be sent to Mt. Eburacum, the Mines of Death. When Roy arrived at Castle Edina, the situation was already looking grim...”
—Opening Narration

Escape to Freedom (自由への脱出 Jiyū e no dasshutsu) is Chapter 11B of Fire Emblem: The Binding Blade if you visited the most eastern of the two villages back in Chapter 9: The Misty Isles.

If all the villagers survived, you will get an Energy Ring.

This chapter is not too hard. Just watch out for the Ballistae, though, as they can one-shot Elffin. You will appear from the Northeast with Elffin joining you at the beginning. Send a staff user and a competent unit to the Northwest. Then, send a couple of competent units (like Alen and Lance) to the South, clearing the path for everyone else. When Geese appears, recruit him with Roy quickly, or else he may die to the enemy forces

When Bartre appears, he will charge towards Morgan. Watch out for reinforcements flooding out of the castle. Make sure to recruit Bartre for that nice Brave Axe he wields. Morgan does not pose as a really big problem because, as you should have an Armorslayer still in the supply.