Member of the Whitewings

Brianna Knickerbocker
[view]
“My sisters say that being the youngest, I’m good at adapting to situations, but being adaptable doesn’t mean much when your luck is as terrible as mine! They think I’ve had it pretty easy, but it’s actually been tough for me. I have to admit, sometimes I wish they could understand that a bit more…”
—Est in Echoes: Shadows of Valentia

In Fire Emblem Awakening, Est is the first DLC character for the Second Series DLC Pack and was illustrated by Kinu Nishimura.

Est is the youngest of the Pegasus Sisters of Macedon under Minerva's command. Unlike her elder sisters Palla and Catria, she joins late in the game, as she decided to steal Mercurius before returning. She falls in love with the knight Abel, and eventually marries him and moves to Altea.

She and her sisters also appear in Fire Emblem Gaiden. According to Est, Palla, and Catria's base converstions in the remake, Est had left the Whitewings the day after the War of Shadows, wanting to open up a shop with Abel and live a normal life. Unfortunately, Est ends up getting captured by Grieth, and her sisters follow the pirate ship to rescue her, but they lose sight of it near Zofia Harbor. Jesse tries to save Est, but gets captured. After Celica's party rescues Jesse, they travel to Grieth's fort, defeat Grieth, and save Est. After the war, she returns to Archanea with her sisters, but promises to come back some day.

In Mystery of the Emblem, Est is captured by the Archanean army to force Abel to fight against Marth. She can be rescued and once again fight alongside Marth's army. After the war, she leaves Abel and vanishes, leading him to disappear in search of her.

As the youngest of the three Whitewing sisters from Archanea, Est is pure and innocent and often gets told off by her sisters. One such example is in her supports with Catria, as she keeps showing junk that she seems to genuinely believe is special.

Though she is cheerful and chatty with a straight-forward personality, the repeated captures take a toll on Est's self-esteem. After she is rescued in Chapter 15 of New Mystery of the Emblem, her support conversations with her husband and her sisters show that she believes that she is a burden to him and doubts her worth to even be his wife. It is strongly implied that the reason she disappears after the War of Heroes is because she believes that Abel would be better off without her.

Though she often gets into trouble, Est regularly mentions that she wants to stop being a warrior, settle down, and run a shop with her husband.

Est, and her sisters Palla and Catria, are all Pegasus Knights recruited in Celica's route. When considering all of the Pegasus Knights in Gaiden, Est and Catria are both strong all rounders whose balance between Speed and Strength usually makes them the most offensively potent. Palla is strong and durable but slow for a Pegasus Knight, and Clair is very agile but fragile.

In Gaiden, Est is the most statistically impressive of the Pegasus Knight sisters, having the single highest growth rates in the game and by quite a lot at that. She will start out much weaker than her sisters if you leveled them at all, and will require some babysitting until she gains half a dozen levels. However, if you do choose to level her, she will easily become the most powerful of her sisters, beating them both in all stats except for HP. Catria and Est will usually wind up even in stats or separated by 1 or 2 points in almost everything. The only stat that really separates the two is Defense, which Est will have a lot more of.

The two problems with Est are her late recruitment and low level. If you put in the effort of bringing her up to speed, she will not disappoint. Not only is she the most powerful among her sisters, but she is among the most powerful in the entire game. However, Catria is nearly as good as her and is available for almost the entire game. While Palla is statistically inferior to her sisters by a moderate margin, her availability may prove more useful overall than Est's statistical superiority. So while Est does have the most potential, her late recruitment means players may opt not to level her.

In Fire Emblem: Shadow Dragon, both of Est's sisters have their growths raised significantly, while Est's growths have been lowered. This, due to her low starting stats, usually makes her less useful compared to the original. However, she still has a great deal of potential, if the player chooses feed her enough experience (which isn't too hard, thanks to her being able to fly and wield effective weapons at base).

Fielding her as well as Palla and Catria allows you to initiate the Triangle Attack, which can be helpful against some strong lategame enemies you couldn't defeat in one hit otherwise. While using the Triangle Attack forces you to group all three of them around one enemy, which is unwise in most cases, it can serve as a fail-safe method to get rid of a single enemy that otherwise would kill or heavily damage one of your units.

Otherwise, she joins extremely late but has nice growths, and comes with a Ridersbane in a chapter where the enemy is filled with cavalry, helping her to get kills early on. Reclassing her to myrmidon or archer are also common choices because she has high growths fit for a swordmaster or sniper with much higher statcaps for speed and skill which cancels out her lower strength.

Help Description: A pegasus knight from Archanea. The youngest of three sisters.

Junior Whitewing
Youngest of three sisters who are pegsasus knights for Macedon. Appears in Fire Emblem: Mystery of the Emblem.

Est is widely considered to be the strongest of the three Whitewing sisters performance wise specifically when she inherited other weapons. Though her Spd is middling, her impressive Atk and Res serve two particular purposes. She is an effective Brave Lance user and an excellent Ploy unit. This also allowed her to combat blue and red dragons effectively. Est still has some flexibility thanks to her weapon options but ultimately she is focused on straightforward offense mostly.

Est has a Heavy Spear which deals effective damage to armor units. When supported and with proper skills on hand, Est could easily one shot some powerful armors like Zelgius, Zephiel, and Arden, especially when the Weapon Refinery was first introduced and boosted it to a Slaying Spear which not only dealt effective damage to armors, but could neutralize their received buffs. In a later update, Est alongside her sisters received upgraded versions of their base weapons and Est was given her Whitewing Spear which could be refined further. If Est is within two spaces of at least two Flier units, she gains +3 to her core stats. If she initiates an attack, she performs an immediate follow-up attack. The effect is extremely powerful, but coordinating your units to use it can be difficult. Est in particular can use this to eliminate many powerful Armor units before they get a chance to retaliate.

Shove pushes an ally forward one space, which is a minimally useful unit positioning skill. Defiant Resistance boosts her Res during combat if her HP is under a specific threshold, however her bulk is not high enough to safely employ it. Seal Speed lowers her target’s Spd by 7 after combat involving her which can allow her to follow up and deal more damage if a refresher unit sis available.

Est is at her weakest during the enemy phase as she lacks the Def from any physical unit. Any form of green unit easily checks her even Hector and Amelia who both, despite being exploited by her Spear, has the color advantage and bulk to sustain a hit and retaliate hard. While she can sustain a hit herself from most mages, Green mages who can receive buffs are exceptionally powerful against her like Nino and Soren. Merric is another good counter as he has exceptional physical bulk, has color advantage, can inherit Close Counter to counterattack her at close range, and his Excalibur deals effective damage against her as a flier. Finally the flier status also leaves her vulnerable to common Bow units that appear often such as Brave Lyn, Bridal Cordelia, and Innes.

Est can take full advantage of her new weapon to use the flier team boost as her means of improving her damage output. As mentioned above, she can still be perfectly viable with a Brave Lance as the loss in Spd is easily covered by the guaranteed immediate double attack. Regardless of her weapon choice, Est maintains a similar build either way.

Reposition is a better overall unit positioning skill, especially on a flier team. Her Special Skill options range from Glimmer for flat damage boosts, Moonbow to ignore part of the enemy’s Def, or Iceberg to take advantage of her high Res. Death Blow grants her a further Atk boost when initiating while Swift Sparrow improves her Speed and can be a better option on her Whitewing Spear depending on her match-ups. Chill Defense targets the unit with the highest Def on the enemy team and inflicts a Def -7 Penalty onto them. Most of the time, this will apply to Armor units, allowing her to weaken them for her to finish off. Flier Formation can also be considered move closer to flier allies so she can utilize her refined Whitewing Spear effect. Skill C has many variations, but using Hone Fliers, Ward Fliers, even Flier Guidance are great complimentary skills for a flier team focus Est. Otherwise for general teams, Wave skills, albeit expensive, are worthy alternatives.

Springtime Flier
Youngest of the three Pegasus Sisters from Macedon. She's come to the spring festival as a bunny, just like her sisters. Appears in Fire Emblem: Mystery of the Emblem.

Little Sister - Est
"Est fell in love with an Altean knight, and found that the path of the heart was a surer route to happiness than that of the spear."

(If both Palla and Catria are alive)
'I'll definitely come again! Thank you, everyone~~'
No matter where she goes, Est always remains upbeat.

(If one or both are dead)
'Big sister(s)...'
Remembering the older sister(s) who had died for her sake, Est wept.

(If both Palla and Catria are alive)
Successfully reunited with her sisters, Est returned home in triumph. Tales of her further exploits line the pages of Archanea’s history books.

(If Palla or Catria died)
Though painful loss hung over her return home like a dark cloud, the annals of Archanean history are replete with tales of Est’s glorious exploits later in life.

Wayward Knight
"After the war, Est said her goodbyes to Abel, for reasons known only to her and disappeared."

(If Abel is dead)
"Unable to bear the sadness of losing Abel, Est disappeared after the war"

Est is illustrated in the trading card game Fire Emblem Cipher with the following cards: 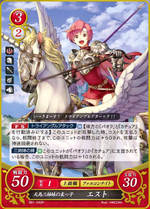 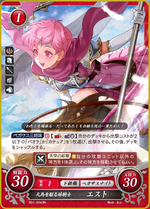 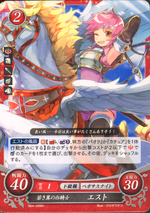 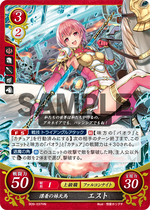 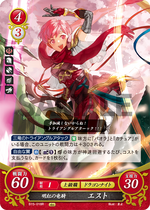 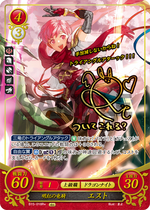 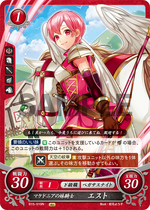 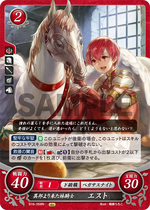 In the French and Italian language, Est means "east", as in the cardinal direction. In both French and Latin, Est also means "is".