“I can't believe an airhead like you is serving under that calm and collected Lord Runan. Why do you want to know my name? If that was a pickup line, then I'm afraid I've heard far better.”
—Estelle, in a conversation with Arkis

Estelle (エステル Esteru, fan translated as Esther) is a playable character from TearRing Saga: Utna Heroes Saga. She is the daughter of Count Merlon of Verge and the adopted sister of Raffin. Despite her father's opposition, she became a knight in order to be helpful to him.

Estelle is introduced when she offers to accompany Raffin to thank Runan and his knights for rescuing Sasha. In her first scene, she teases Raffin by claiming that he has romantic feelings for Sasha. She is soon scolded and reminded that she should be training instead of discussing trivial matters. When Runan arrives in Verge seeking aid from Merlon, she and Raffin decide to help him by joining his army. Early in the game, she meets Arkis and immediately turns down his offer to become her bodyguard. Due to his flirtatious behavior, she has a low opinion of him and initially refuses to introduce herself. However, once Arkis reveals that he honors all of his comrades by memorizing their names, Estelle gives out her name, but says that she does not ask for him to remember it.

If Raffin accepted the Dragon Flute from Sharon, he and Estelle part ways in the ending, as he returns to Barge with Sharon. When she reunites with Merlon, he reminds her that she is now his only successor and therefore has more responsibilities. However, if Raffin refused to accept the flute, he and Estelle return to Verge together.

Estelle has a serious and harsh personality, although she can occasionally be playful. She is pampered as a result of her noble upbringing, and Arkis assumes that she expects others to look after all of her personal needs. She harbors a tendency to lash out at others, even over trivial matters. She fears that Raffin will eventually leave her behind for Barge without a second thought and accuses him of not caring about her. Despite being aware of her inexperience on the battlefield, she refuses to have a bodyguard. She also thinks that Rina is old enough to be considered a lady and tells Arkis that he should see her as one rather than a child.

While Estelle has poor base stats, she has decent growth rates and a collection of powerful skills to learn. All of this combined with a solid promotion with decent stat gains makes her a viable unit. However, she can turn out to be underpowered due to her rather low Weapon Level, which could force her to use the inaccurate and weak Slim Lance and Slim Sword. Because of this and her lack of Elite at lower levels, she has slightly questionable value. However, Estelle has the potential to become quite good, so use her at your own risk.

Estelle is a French feminine name that was derived from the Latin word stella, meaning "star". Her name in fan translations, Esther, is feminine given name that also means "star". In the Bible, Esther was the eponymous heroine of the seventeenth book of the Old Testament and a Jewish woman who became the queen of Persia. 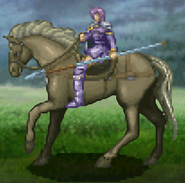 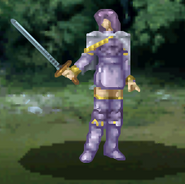 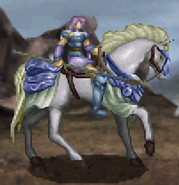 Estelle's battle model as a Paladin. 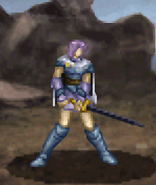