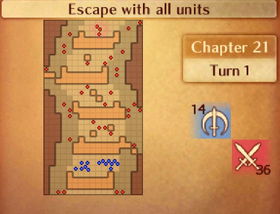 Escape with all units

Chapter script
[view]
“Corrin's army approaches the Eternal Stairway. They expect to meet Hoshidan forces, but something else awaits them.”
—Opening Narration

Eternal Stairway (黄泉の階段 Yomi no kaidan lit. Stairway of Yomi in the Japanese version) is Chapter 21 of Fire Emblem Fates in the Conquest Version. This chapter takes place in Eternal Stairway.

Unlike other chapters, your units must escape the Faceless that line up the Eternal Stairway. Your units start at the bottom of the stairway while the escape area is at the top. In addition, there are powerful Faceless and Stoneborn units that are guarding the upward path. Faceless reinforcements will appear from either the top or bottom of the map indefinitely every turn. The Dragon Vein in this chapter will allow you to freeze all enemies on the map for one turn. This is a powerful mechanic, as it prevents Faceless in the vicinity from swarming friendly units, as well as stopping the reinforcements at the top and bottom of the map for as long as more Dragon Veins can be activated.

Having Blessed weaponry can help against the monsters, as they take bonus damage from such.

On all modes, the Faceless carry Savage Blow; although this isn't a danger alone, the sheer amount of Faceless on the map means that they can easily chip off a lot of health if they are not killed in one battle. Most of the Faceless on Lunatic mode will also carry a weaponbreaker skill which usually makes it more tedious for players to hit them. The Stoneborn are primarily the largest threat due to their attack range. On all modes, they come with Wary Fighter, but on Hard and Lunatic, they also get Renewal and Heartseeker, requiring them to be taken down quickly.

A simple and fast way to complete the chapter is to simply pair up Corrin with a flying unit. Use the Dragon Veins to freeze enemy troops and make your way to the escape zone.

Note to beat the chapter, all units have to escape. This means even if you have all but one unit escape but they fall in battle, you will fail. Replicated units will also be unable to escape alone; the original character must escape, after which the replica will warp out of the map.

If desired, the Faceless commander can be taken down for an Arms Scroll.

Note: All enemy reinforcements are equipped with Void Curse, which prevents the player from obtaining experience points from them upon death.