Troubadour (Genealogy of the Holy War)

Allegra Clark
[view]
“Yeah, but I heard you only had a few soldiers in Chalphy. And I know you, Sigurd. You are always jumping into this kind of stuff without thinking. Especially with Father being away... I knew I had to come.”
—Ethlyn to Sigurd, in Genealogy of the Holy War

Ethlyn (romanized as Eslin in the Super Tactics Book) is a playable character from Fire Emblem: Genealogy of the Holy War. She is the daughter of Duke Byron of Chalphy, the younger sister of Sigurd, and the wife of Prince Quan of Leonster. She is also the mother of Altena and Leif, as well as the aunt of Seliph. On her father's side, she is a descendant of Crusader Baldr and a distant relative to Oifey.

According to unofficial manga-based statistics, Ethlyn was born in Gran 739. She stands at 164 centimeters in height, weighs 47.1 kilograms, and her blood type is A.

After their mother's death, Ethlyn took it upon herself to look after Sigurd and Byron since the two were quite slovenly men. She later married Quan and moved to Leonster to live with him. During their time there, she gave birth to their daughter and first child, Altena. Upon hearing about Verdane's invasion of Grannvale, she and Quan leave Leonster with Finn in tow and rush to Sigurd's aid, thereafter assisting his army in the rescue of her childhood friend, Edain.

In Chapter 2, Ethlyn mentions how fortunate Sigurd is to marry a kind person like Deirdre. Deirdre then gifts Ethlyn with the Light Brand, which is eventually passed on to her son, Leif, and serves as his personal sword in Fire Emblem: Thracia 776.

Later, in Chapter 3, Ethlyn grieves for Deirdre after the latter's sudden disappearance and asks Quan if the two of them will ever be separated. She also gives the Gáe Bolg to Quan, which she has carried since they left Leonster, but hesitated to hand over due to hearing about the Curse of the Gáe Bolg from his father, Calf. After taking refuge in Silesse with Sigurd for one year, she and Quan decide to leave along with Finn in order to bring back reinforcements.

Ethlyn and Quan appear again in Chapter 5, in which they arrive in the Aed Desert with the powerful knights of the Lance Ritter. She brings along a three-year-old Altena, despite Quan's discomfort, and convinces him to accept it. Once they discover that they are being followed by King Travant of Thracia and his Dragon Knights, Quan orders Ethlyn to escape with their daughter, but she refuses and instead gives him courage by saying that they can win if they fight together. But Ethlyn and Quan perish in the resulting battle, leaving Altena to fall into Travant's captivity.

According to Thracia 776, Ethlyn was an older sister figure to a girl from Leonster named Selphina, who was deeply affected by her death.

Ethlyn in her early years was a tomboy, but she lost her rougher traits, transitioning into a proper noble lady after she married Quan. [1] She is a kindhearted and motherly individual with a cheerful personality.

She shows concern for all of her family members, including her sister-in-law, Deirdre. She also expresses frustration with the sloppiness of Sigurd and Byron.

Like her brother, Ethlyn is determined and never backs down once she has her mind set on something. This trait ultimately becomes her fatal flaw, as she stubbornly refuses to retreat from a dire battle to protect herself and her daughter.

Ethlyn joins you in the Prologue, and she will act as a healer for Sigurd's army mostly since she is both the first unit to join you that is capable of healing as well as the most mobile healing unit in Sigurd's army until Erinys promotes.

Ethlyn acts as a bit of a jack of all trades, master of none. While she can heal, she only has access to C-level Staves and her Magic growth is very low, so her heals will be rather weak. In fact, her growths across the board are quite weak despite her Baldur Holy Blood, with her having the third worst overall growths in the first generation. Regardless, her heals should be sufficient to patch up your mounted units on the go, even if she is a clearly inferior healer to the likes of Edain. Ethlyn will not be dealing too much damage, as her access to decent weapons is limited, she has no Adept or Pursuit, and her Slim Sword will not be doing too much, though her sibling bonus with Sigurd and lover bonus with Quan can be of use if properly set up. However, once she obtains the Light Sword from Deirdre at the beginning of Chapter 2, her offense should begin to pick up. You can further give her the Magic Ring to increase the ranged damage from her Light Sword as well as her potential as a healer.

What Ethlyn truly depends upon is her promotion, which nets her a whopping +20 to her stats and +1 Movement. At that point, her capability to both heal and deal respectable damage increases substantially, and her Critical skill will become much more relevant. All in all, Ethlyn is very important in keeping your highly mobile units healthy as she is the only unit capable of keeping up and topping them off, but she is not particularly impressive at fighting.

In the Prologue, Ethlyn may speak to Sigurd, but nothing will result of it.

In Chapter 1, if Edain speaks to Ethlyn, Ethlyn will receive the Return Staff.

In Chapter 2, if Deirdre speaks to Ethlyn, Ethlyn will receive the Light Sword.

In Chapter 3, if Ethlyn speaks to Quan, he will receive the Gáe Bolg.

Ethlyn is lovers with Quan by default, and thus does not possess any love growths with any other character in the game.

Unlike most mothers, her son Leif is her primary child, and he will inherit her inventory and his stats and growths will come primarily from her rather than Quan. The player should have Ethlyn sell her staves before the end of Chapter 3, as Leif will not inherit them and they will disappear from the game. He begins with rank A in swords and thus will inherit all her swords (and rings). Consider giving her the Pursuit Ring before the end of Chapter 3, as this item is Leif's only access to this key skill before promotion, which will make scoring kills much easier for him. The Armorslayer is not highly coveted, and is also very useful for Leif to farm kills from the many armored units that attack Leonster Castle in Chapter 7.

Spirited Princess
The younger sister of Lord Sigurd of Chalphy with an adventurous spirit. She cares deeply for her family. After she marries Prince Quan of Leonster, the pair have a girl and a boy. Appears in Fire Emblem: Genealogy of the Holy War.

Glimmering Lady
Noblewoman of Chalphy, attending the dance festival with her husband, Quan. As always, she supports him every step of the way. Appears in Fire Emblem: Genealogy of the Holy War.

Ethlyn is illustrated in the trading card game Fire Emblem Cipher with the following cards: 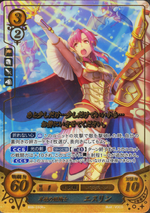 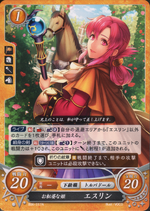 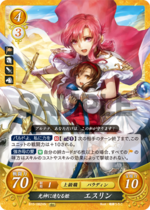 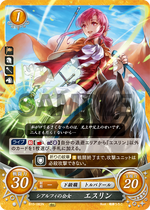 Ethlinn or Ethniu is a Celtic mythical princess. Her partner was Cian (Quan). The name is of Old English origin, and might also be a variation of Ethel, meaning "noble".