Ettard is the personal Sword of Ike, which he initially wields as his weapon of choice in Fire Emblem: Radiant Dawn. Ettard is a fairly potent weapon with its high Might equivalent to a Silver Sword, its generous Durability, and some added Critical Rate for good measure, but it has relatively low Hit Rate for a sword. A sword bearing an appearance strikingly similar to Ettard may be seen in a picture of Greil that is shown after Ike defeats the Black Knight in the Tower of Guidance - a distinct indicator that Greil might once have worn the blade, and Ike has since inherited the blade as a treasured keepsake of sorts.

In Arthurian legend, the knight Sir Pelleas bore feelings of love for Lady Ettard (alteratively spelled Ettarre), but she responded by spurning his love, sending her guards to drive him away from her castle on a nightly basis. Pelleas then sought Sir Gawain's assistance in his quest to winning Ettard's heart, a tactic that was not just botched, but wound up with the worst possible outcome - specifically that of Ettard falling in love with Gawain instead. Upon discovering them sleeping together, Pelleas stormed off in a jealous rage, later choosing to marry the Lady of the Lake, Elaine. In a bid to avenge the humiliation her spouse had suffered, Elaine placed Ettard under a curse, such that she was compelled to love Pelleas as much as she had hated him. She placed a similar spell on Pelleas, where he was urged to hate Ettard as much as he had loved her. Soon after, Ettard left Gawain and professed her love for Pelleas, only to be mercilessly jilted. Pelleas was thereafter said to have lived happily ever after with Elaine. 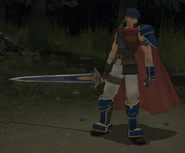