Chapter 9: Sanctuary of Sorcery (New Mystery of the Emblem)

Sorcerer
[view]
“I’ve no taste for war, but I do have a fierce hunger for ending it. Let’s usher in a new era, you and I.”
— Etzel to Marth

Etzel is a Sorcerer and is one of the exclusive characters in Fire Emblem: Shadow Dragon and Fire Emblem: New Mystery of the Emblem. He is a wandering spell slinger that got caught in during the War of Shadows. He had a wife named Ursula, who died in one of many attacks that Dolhr launched, and all that is left of her is her ring he holds as a memento.

During his travels, Etzel was captured by General Dactyl. He was held as a prisoner of Helena Castle, a stronghold and key supply fort of Grust and Dolhr, during the events after Marth had reclaimed his homeland, Altea. When the Altean Army began marching towards Helena Castle, Dactyl strips Etzel of his weapon, along with his ring he holds in memory of his wife, Ursula. After giving it a second thought, Dactyl uses the ring as an advantage to force Etzel to fight against the Altean Army, not caring on how experienced he was in combat. After Dactyl is killed, Etzel regains his ring and joins Marth intending to end the war.

After the war concludes, Etzel disappears and travels the world over the years.

Before the War of Heroes

After his travels, Etzel journeys to Khadein and remains there for a time being. During his time there, Wendell is suspicious of an appearance of a Heretic Bishop somewhere in the outskirts of Khadein and requests Merric to investigate. Merric is accompanied by his friend and rival, Arlen, and Linde, who also happened to have returned to Khadein at the time. Once Etzel heard of this, he volunteers himself due to having ties with Khadein and being indebted to them, and joins up with the group on the investigation. Upon arriving to their destination, Etzel is concerned that the team is only assembled of mages, and notes that they should proceed carefully. After the investigation concludes, the team discovers that the dark bishops that served under Gharnef in the previous war were trying to resurrect him, with Arlen being the only one witnessing that Gharnef has returned.

After the investigation requested by Wendell had concluded, Etzel chose to remain in Khadein. When the War of Heroes began, Etzel heard rumors that Marth had turned against the kingdom of Archanea, and he liberated Grust and Macedon, whom they were up against. When the Altean Army were heading towards Khadein, being pursued by Astram's Archanean Mercenary squad, Etzel could not sit out of this war and volunteered to join the ranks of Khadein to stop the Altean Army. When meeting Marth on the battlefield, he couldn't believed the person that Marth has become and asks him if he still wished to bring peace to the world. When Marth gives him his answer, Etzel believes that Marth speaks truly to his words, and joins his cause until war is ended.

Clear Chapter 17 with 15 or fewer units to unlock Chapter 17x. Etzel is a foe in this chapter. To unlock him, complete the chapter without killing him.

He appears as an enemy unit in Chapter 9. Have Marth speak to him.

Compared to fellow tome-wielders, Etzel boasts amazing defense and resistance base stats, while having greater growths to easily outpace other mages in those areas. However, he will most likely end up with lower speed than other potential mages and may struggle to Double Attack on higher difficulties. Etzel is recruitable in Chapter 9 and has a high enough tome level to be a worthy user of Excalibur.

“Wait for me, Ursula!”
—Etzel's death quote
“Sorry. I mean you no harm, but neither have I any wish to die here.”
—Etzels battle quote upon fighting him.

The spell slinger Etzel vanished after the war as quickly as he came. His wanderings took him around the world for years to come.

After the war, Etzel resumed his travels, as if looking for something he had lost.

Etzel is illustrated in the trading card game Fire Emblem Cipher with the following cards: 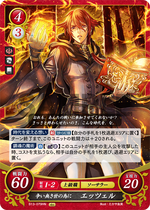 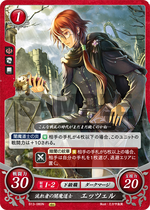 Etzel is the name of the King of the Huns in the Nibelungenlied, an epic medieval German poem that retells the historic downfall of the Germanic Burgundians. It is also identified as another name of the historical Atilla the Hun.

Etzel as a Sorcerer in Fire Emblem 0 (Cipher).

Etzel as a Dark Mage in Fire Emblem 0 (Cipher).