Andrew Buck
[view]
“That's right. And then I dropped it and SPLASH!! Right in it went...it wasn't in the water long, but those pages were totally illegible...”
—Ewan in a support conversation with Saleh

Ewan is a playable character in Fire Emblem: The Sacred Stones. He is Saleh's student, the younger brother of Tethys, and part of Gerik's troop.

Born in Jehanna, Ewan is a sage-in-training with much potential, according to Saleh. He is the third and final Trainee unit, more exactly a Pupil.

In Eirika's route, Ewan is seen in Carcino, where Pablo starts a coup and attempts to find and kill both Innes and Klimt. Tethys has Ewan stay in the local inn until the battle subsides, much to his disappointment. After Pablo and his army is routed from Carcino, Ewan introduces himself to Eirika and offers her a way into Caer Pelyn, which she accepts.

On the way, they run into an abandoned fortress, which has been overrun by monsters. Ewan attempts to participate in the battle, but is either told by Innes or his sister to stay out of the battle, which annoys him. After disposing of the monsters in the fortress, they reach Caer Pelyn, though monsters quickly attack it. Ewan is chased by a Revenant, though he manages to escape by entering a house. He later joins the party as a permanent member upon visiting the house he is hiding in.

On Ephraim's route, Ewan has Saleh drop him off at Taizel, so that he can speak to Marisa. He heads into an inn to find out where Marisa is located. Upon visiting him, he joins Ephraim's forces so he can speak to Marisa. If he does so, Ewan tells Marisa that the mercenary guild had a mix-up and asks her to join Ephraim's group so they can find Gerik, which she agrees to. If Ewan speaks to Saleh in Scorched Sand, he will be relieved to see his teacher again.

He is quick-witted, excitable, and enjoys playing practical jokes on Saleh. Ewan also appears to enjoy brain teasers and riddles, as shown in his support conversations with Ross. He is troublesome and keeps causing accidents which Saleh does not like; at one time he "accidentally" threw Saleh's magic tome to the river. Also, in a support conversation with Tethys, Tethys gets him to admit shaving half of a man's mustache off, and putting a frog in another man's boot.

His conversations with Dozla show that he is a daydreamer, as he thinks about creating "flying coaches" and a communication device for everyone to use (as only mages can use them) in the near future, something which Dozla both encourages and supports.

*55% in the Japanese version

Ewan joins midway through the game at level 1, poor base stats and average growths. His 5 base speed on top of 35% growth on top of higher ranked tomes being heavier means he'll be fighting to not even get doubled by most enemies. Overall, he requires a ton of investment for little to no payoff and should only be considered if the player likes training weak units and seeing them grow into stronger ones overtime, or if they want another summoner. It might be a good idea to recruit Ewan in Ephraim's route, since the player can try their luck at the arena in the chapter where he joins, while in Eirika's route it will be much more difficult to train him.

If someone manage to promote him, the obvious choice would be the Mage family class, mostly to maintain his Anima magic experience, but there would be enough anima mages at that point of the game, promoted or not, if someone choose Eirika's route. Making him become a Shaman has his advantages and disadvantages. His weapon will change along his weapon rank, which will return to E. On other hand, he'll get more bonuses for stat that the Mage family won't give. Making him promote into a Druid is probably the best choice as he'll also regain his ability to use Anima magic. In the end, Ewan can really shine in Ephraim's route, while being overshadowed in Eirika's route. Making him a quite skilled and quick Anima magic user or a lucky and resistant Dark magic user is up to the player.

“I'll show you all what my magic can do.”
—Final Chapter Quote in The Sacred Stones

Ewan, Enthusiastic Student (あどけなき魔道 Adokenaki madō)
"Ewan continued his studies, modelling his life after the teaching of Saleh. Eventually, his education branched of into different paths. His insatiable curiosity led him on a trip to explore the world."

A Support with Saleh
"Master and student returned to Caer Pelyn to study in peace. Ewan worked hard, and in time, his power grew to rival Saleh's. As equals, the two continued their studies together and expanded their knowledge ever more."

A Support with Amelia
"After the war, Ewan and Amelia set out, as promised, on a trip around the world. Their deeds along the way made small legends in the regions they visited. In time, Amelia gave birth to a daughter, and they settled down."

Ewan is illustrated in the trading card game Fire Emblem Cipher with the following cards: 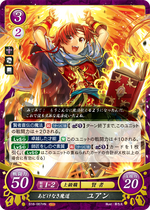 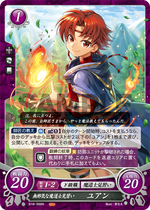 'Ewan' is an anglicized form of the name 'Eoin' which is Irish for 'born of the yew tree'. Yews are long-lived poisonous evergreens which have come to connotate both death and immortality.

The Yuan Dynasty, which began when Kublai Khan proclaimed himself emperor of China, were the successors to the Mongol empire started by Genghis Khan.