Varies
[view]
“Wind magic for men (Merric can use at level E)”
—In-game description, Shadow Dragon and New Mystery of the Emblem

Excalibur is a Wind tome that debuted in Fire Emblem: Shadow Dragon and the Blade of Light.

Excalibur is a legendary Wind tome that appears in multiple games within the Fire Emblem Series. First used by Merric in the Archanea Series, this tome later reappears in Fire Emblem Gaiden as a Black Magic spell and later in The Sacred Stones as one of the Sacred Twins of Jehanna. When used, this tome will conjure wind blades to slice the enemy.

In Fire Emblem Heroes, Excalibur is exclusively used by Merric. A variation of Excalibur called Dark Excalibur appears as the exclusive skill of Sonya, although Merric can also obtain it via Weapon Refinery.

In the Archanea Saga, the Excalibur tome was the signature tome of Merric and was only usable by him in the original games as he mastered the ability to use it by Wendell's guidance. In the remakes, Excalibur became usable for all magic units with a B rank in Magic, however Merric is the only unit who can use it regardless of his Tome weapon rank.

In The Sacred Stones, the Excalibur tome plays a more prominent role as the Wind Blade, where it, alongside the Ice Blade Audhulma, is one of the Sacred Twins of Jehanna. Both weapons are given to Eirika and Joshua by Queen Ismaire in Chapter 14A as her dying wish. This action symbolizes her desire for peace as she entrusts her country's legacy to her son.

* Shadow Dragon only; Weight is negligible in New Mystery of the Emblem.

Excalibur is the name of the legendary blade wielded by King Arthur. A distinction is usually made between the blade that he received from the Lady of the Lake and the sword which he pulled from the stone to prove his kingship. Thomas Malory, author of 'Le Morte d'Arthur," asserts that the name Excalibur connotes the meaning of 'cut-steel.' Earlier versions of the name include Chaliburne, which brings to mind the French word for 'heat' (chaleur), and the English word 'burn,' which either means 'burn' as we understand it today, or 'man'; the original Welsh name was Caledfwlch (hard cleft), cognate to Irish Caladbolg. Before breathing his last, King Arthur requested Sir Bedivere, his last remaining knight, to throw the Excalibur blade into a lake, whereupon the Lady of the Lake reclaimed it.

The Excalibur tome, as it appears in the sixth series of the TCG. 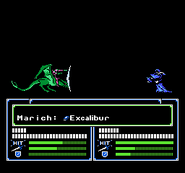 Merric casting Excalibur on an enemy Dragon Knight in Shadow Dragon and the Blade of Light.

Animation of Merric countering with Excalibur on a Flying Dragon in Mystery of the Emblem.

Merric casting Excalibur on an enemy in Shadow Dragon. 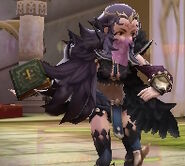 Nyx casting Excalibur on an enemy Knight in Fates.

Sprite of the Excalibur tome from Fire Emblem Heroes.