Chapter 20: The Sword or the Knee

Spike Spencer
[view]
“After I'm done with you, Say'ri, I could be the next princess.”
—Excellus

Excellus (エクセライ Exceli in the Japanese version) is an enemy boss character from Fire Emblem Awakening and one of Walhart's generals and tactician.

Excellus serves Walhart as his tactician for battles, but was secretly manipulating him. Excellus' skills lie not in war tactics, but his ability to con and deceive others into joining Walhart's army through blackmailing and threats. Excellus cares only for himself, Grima and seizing power, even if it means abandoning his superiors. However, despite his cowardly nature, Excellus was secretly a devout member of Grimleal, and was manipulating Walhart to fail in his quest to destroy the Grimleal. Excellus also took a deal from Aversa which offered him the throne of Plegia if he was able to take the Fire Emblem from Chrom.

At Fort Steiger, Excellus managed to threaten numerous Resistance members to fight Chrom's army and aid Pheros to her disgust, but in the end, it was futile and the fort was seized. Later at the Demon's Ingle, Excellus spoke to Yen'fay before his battle with his sister and Chrom's army and openly mocked him. After Yen'fay's death, Excellus revealed to Say'ri why Yen'fay allied with Walhart, and laughed as Say'ri learned the heartbreaking truth before warping away.

Believing to still have much of Chon'sin under his control, Excellus returns to Valm to prepare for the battle between Walhart and Chrom. After Chrom defeats Walhart outside of the castle, Excellus looks outside after Walhart tells him to. He is surprised that the Chon'sin forces are now allied with Chrom and his army, unable to understand why they had turned sides. Walhart deduces that they were loyal to Yen'fay and not under the control of Excellus' blackmail. Walhart also reveals that he has been aware of Excellus' betrayal towards him, having learned about his secret deal with Aversa. Hearing this, Excellus asks Walhart why he did not have him killed, only for Walhart to state that he does not see Excellus as a threat. Excellus attempts to flee the castle, but Walhart orders him to lead his personal guard into battle and threatens to kill him on the spot if he refuses. With no other choice, he fights against the Shepherds, only to be killed in battle.

Excellus' gender is rather confusing, due to his ambiguous appearance and his use of feminine titles. In Chapter 22, Aversa indicates in a conversation with Robin that Excellus lacks male genitalia.

Excellus appears as an enemy Mirage and boss that possesses acclaimed director Kuen Tarachino. With Tarachino under his influence, he puts Tsubasa Oribe through a series of challenges that lead her to grow as an actress. When he finally challenges the party to combat, Yashiro Tsurugi assists him in battle. Upon his defeat, he attempts to flee like a coward, but drops dead.

Excellus later reappears in Illusory Dolhr, having been revived by the Shadow Dragon.

Excellus is redesigned as a robot with a very feminine figure, two giant legs and his face on a computer screen.

In the battle, it is advised that you pay attention to his current color, which hints his weaknesses. If the player lowers Yashiro's HP enough, Excellus will swap his own HP percentage with Yashiro's, which heals Yashiro, but also damages himself. When Excellus reaches half of his HP, he will enter his second phase where his lights turn white, meaning that he is weak to every single element, but also means that he is in his most dangerous state since he will start spamming Ma -dyne spells, dealing massive damage to the party. It is advised to spam healing and damage Excellus with your most powerful attacks, and to also kill him quickly in this phase.

Excellus is illustrated in the trading card game Fire Emblem Cipher with the following cards: 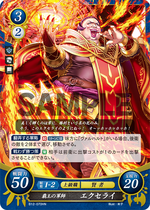 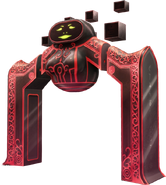 Artwork of Excellus as well as his original form in Tokyo Mirage Sessions ♯FE.

Artwork of Excellus in Fire Emblem 0 (Cipher) by Yoneko.