“We were only able to live peacefully because Count Merlon and his knights risked their lives defending us! If one of my comrades deserted my army, I would curse him for the rest of my life. Why? Because he chose to abandon the hapless citizens he had sworn to protect. Because he was a selfish coward who renounced his responsibility.”
—Ezekiel, in a conversation with Leteena

Ezekiel (エゼキエル Ezekieru) is a playable character from TearRing Saga: Utna Heroes Saga. He is a knight in service to Count Merlon of Verge. He is also the older brother of Leteena and the husband of Elette.

While Ezekiel serves in the army, he leaves Leteena in the care of Elette. It is mentioned that he and Elette have attempted to find a cure for Leteena's blindness, but to no avail. If he is present when Kreiss agrees to leave Runan's army with Leteena, Ezekiel will convince both of them to stay.

Ezekiel is a proud and honorable person who would curse a comrade for fleeing in the middle of a battle. He believes that a man living in the shadows is the same as death for him. In his conversation with Kreiss, Ezekiel states that he has no intention of "giving away" his sister to a man without pride.

Ezekiel is decent at base level, having enough Skill to wield a Steel Axe with fairly good hit rates. However, his growths are average, so he will be limited in how powerful he can become upon leveling. His slightly poor stats are countered by him learning almost every terrain skill, boosting his Movement and accuracy. While he is less powerful than Lionel, he is still a decent choice for the player's team. He also has great support bonuses with Leteena.

Ezekiel was a watchman and prophet for God (who called him, most of the time, "Mortal Man"). He was told to do many unusual things like shaving his head (which was taboo for followers of God at that time) and had to throw hair at towns like Jerusalem to resemble what terrors God was going to bring to them as a punishment for turning away from God and sinning against him. His actions can be read about in the book of Ezekiel. 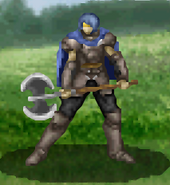