Griffin Puatu
[view]
Fáfnir is a character that appears as the main antagonist (so far) during Book V of Fire Emblem Heroes. He is the king of Niðavellir and the older adoptive brother of Ótr and Reginn.

When a coup d'état toppled the kingdom of Niðavellir and the old king was killed, the country fell to ruin and completely unable to muster a force large enough to invade a country. Eventually, Fáfnir seized the throne by force and became their king, who the people welcomed, ignoring the fact that he was not dvergr royalty.

Amidst the chaos, a pair of siblings found shelter in a village where they were later discovered by Fáfnir who adopted them as his new step siblings. But while the siblings and subjects deeply loved the new king, the righteousness they thought they saw in him didn't last long, as he'd quickly become a tyrant, subjugating his people and invading other countries.

When Fáfnir began his invasion of Askr, Reginn was sent to lead the first wave. When she failed to return, Ótr was initially concerned, but Fáfnir was not.

King of Desolation
King of Niðavellir who rose from his station as a lowly soldier. Remembers nothing of his past.

In Norse Mythology, Fáfnir was the son of the Dwarf King Hreiðmarr and had two brothers named Ótr and Reginn. When Hreidmar obtained the ring Andvaranaut that was stolen from Andvari by Loki as compensation for accidentally killing Ótr, Fáfnir, consumed by greed, killed his father and stole Andvaranaut. The ring however was cursed and Fáfnir was turned into a dragon and was later slain by Sigurd. 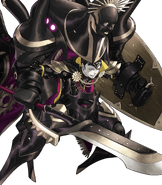 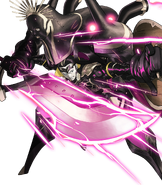 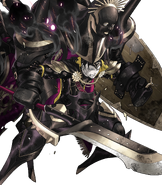 Fáfnir on the key art for Book V of Heroes. 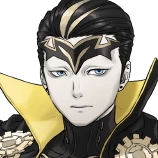 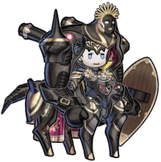 Fáfnir's sprite from Heroes.
Add a photo to this gallery