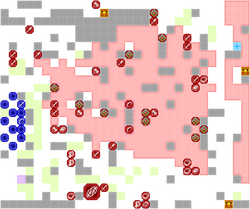 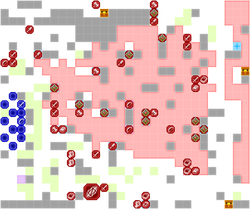 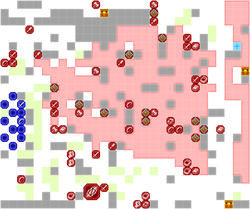 Chapter script
[view]
“With the destruction of Shambhala, the ambitions of those who slither in the dark are forever shattered. However, Rhea has suffered grievous injuries in the process. Yet certain mysteries remain unsolved, so Claude and the others approach Rhea, who is now confined to her room due to her wounds.”
—Opening narration

Fódlan's New Dawn is the twenty-second and final chapter of the Verdant Wind route of Fire Emblem: Three Houses. This chapter takes place at the Caledonian Plateau, located near Garreg Mach.

Rhea reveals the truth about what happened in the past between her and Nemesis. As she speaks with Claude and Byleth, messengers arrive to report that there is a mystery army marching under the Crest of Flames and bearing the Sword of the Creator approaching Garreg Mach Monastery. Rhea says that it must be the Fell King Nemesis.

The Alliance's forces proceed to meet the mysterious army in battle and discover that it is led not only by the Fell King Nemesis but also revived versions of the Ten Elites.

Every third turn/every turn after approaching Odesse, a Flying Demonic Beast will appear to the left of Odesse indefinitely until Odesse is defeated.

This is a map which requires careful levels of attention and some degree of preparation to complete, and will easily trip up a player who is not careful to examine the weapons and spells and items that each enemy is equipped with; all of the Heroes' Relics have some kind of unique quirk and making note of them is key to defeating most of the 10 Elites. However, despite the presence of the Elites, the real most important enemies of the map (save for the obvious Nemesis) are:

Each one of these is important for a variety of reasons. Defeating Lamine will remove the swamp from the centre of the map and replace it with Wasteland tiles, making it much more safe to traverse, and her nature as one of the Elites will make Nemesis weaker. Moreover, defeating her will remove her powerful Bolting from play. Facing her, however, may require her uses of Bolting to be worn out - and even then, the Rafail Gem gives her an almost 50% chance to activate Pavise on physical hits on top of nullifying crits. As well as this, even closing the distance can be hard, with her Black Magic Range +1 giving her a massive 11 range, and on Maddening she has a huge 65 Attack with it. The safest way of dealing with her is to have your highest Res unit approach from the south and tank a hit from both her and Dominic (his Crusher is a magic weapon so do not be deceived by his large range - he only has 49 Attack on Maddening). Kill Dominic on the next turn, heal the Res tank if needed and repeat until Lamine has run out of Bolting. She can then be easily dispatched by a unit capable of doubling her with a Brave weapon to guarantee a kill regardless of Pavise. Even an extremely powerful single attack like capped magic Constance's Bolting will never one-shot her on Maddening if she procs Aegis, so be careful.

The Snipers are a great deal more difficult to approach at first glance, but you have a card up your sleeve - Claude and his Failnaught's Fallen Star. Unless he has Flying Effect Null, he will take large damage and face Crit from the Ballistae as well as Poison Strike, but if he is able to pick off a Ballista operator with Fallen Star, he absolutely should take the opportunity. This can be hard to do on Maddening without a crit or a highly above average Strength stat, but these enemies are hard to remove efficiently otherwise and are surrounded by powerful attackers including Daphnel, Charon, a Wyvern Lord, etc. Daphnel in particular is partial to having very high Crit due to his Aura tome, so the Rafail Gem may be ideal to have on Claude. As for the Maddening-only Sniper at the bottom left ballista, his removal should be your first action taken on turn 1, as the ballista he occupies is extremely useful for luring and chipping down the Agarthan Soldiers and their Demonic Beasts. Its use will allow you to safely close the distance on Odesse while Claude handles the centre siege weapons.

The last critical enemy that must be dealt with is the Maddening-only Gremory. Bohr X is a tome which reduces the health of its target to 1, leaving them entirely open to the next attack. Although the Gremory who has the tome does not move, she is positioned such that the Snipers nearby generally overlap their ranges with her. One option is to, like with Lamine, to bait out the 6 uses of the spell in a tile where no other enemy is in range. However, the Gremory attacking will cause her surrounding Snipers to move up. Instead, she is most easily removed by making use of the Retribution gambit (Indech Sword Fighters is the best source) or the Chalice of Beginnings to kill her with any physical unit as she lacks Pavise unlike Lamine. A similar tactic can be used to draw out Fraldarius and later Riegan.

Otherwise, the rest of the map is a continuation of regular combat against much less threatening enemies. Only a few things are otherwise of note: some of the Heroes in the top right carry Brave Swords; Gloucester has a range of 4 with his Thyrsus and will actively approach, so should be waited for; Blaiddyd, Daphnel and Charon will thankfully never use their Relics and will instead opt for their much weaker Tomes, though take note of Charon's 1-3 range with Death T; some of the Paladins carry Spears and will not move until Lamine is killed on Hard but will move within range regardless on Maddening. Eventually, most of the map will be routed save for Nemesis and probably the Fortress Knight on the bridge.

It should be noted that this chapter and Following a Dream are the only Endgame chapters in Three Houses to allow the player to use the monastery in the same chapter as the battle. This chapter in particular allows one an unprecedented five free days before the battle, allowing you to get some more EXP or cooking/gardening in if needed. It is very beneficial to have the maximum of four meals active at once, and if the player has been diligent enough to obtain the necessary Zanado Treasure Fruit, Goddess Messenger, and Albinean Moose, having four The Best of Fódlan meals active will make the chapter much easier.

Even without the additional power of Mighty King of Legend, Nemesis is a very powerful opponent. He will have a staggering amount of attack, and a fairly high Crit rate, allowing him to break through the defenses of just about anyone. While it is generally advisable that Nemesis not be engaged until all the Ten Elites are defeated anyway, his Cursed Power will regenerate his HP until Lamine, the Gremory of the Ten Elites, is slain; in combination with Renewal, he will recover most of his HP each turn if Lamine is not dispatched first. He will become aggressive after being attacked for the first time, so it is crucial that units with low Def and/or Spd stay in a safe area.

Nemesis has very high Avoid thanks not only to Sword Prowess but also the Stronghold tile he stands on. The easiest way to provoke him off of this tile is to have a unit fire a Ballista at him; this attack cannot be countered so it is safe. Once he has moved in range of your units, attack again with the Ballista and possibly some Gambits in order to keep chipping him - his relatively low HP pool for a final boss (107 hitpoints) means that every point will count. When the time comes to actually directly face him, it may be prudent to use a Blessing (Hevring Prayer Troops have the best stats with this gambit) in case Nemesis gets a crit. The best weapons to deal big damage include Brave weapons like Thunderbrand, The Inexhaustible, Vajra-Mushti; combat arts like Windsweep and Vengeance also deal very high damage to him, although generally only Catherine can get away with using swords on Maddening. Since it is the end of the game, hold nothing back. Once he has reached a low enough HP, Lysithea can easily finish him with Luna, perhaps even attacking at 1 range in order to avoid Keen Intuition. If Lysithea reaches 107 Attack with Luna (102 if willing to bank on a 20% Crest of Gloucester), she can OHKO Nemesis regardless of difficulty, though this will require investment into her as a dedicated bosskiller, as well as considerable use of skills like Charm and Guardian as well as Rally Magic.