Sword
[view]
Fólkvangr (フォールクヴァング Fōrukubangu) is a legendary weapon and a weapon skill in Fire Emblem Heroes. It is the personal sword of Prince Alfonse of Askr. Fólkvangr's edges are coated in gold, while the grip has a glowing blue crystal. It emits a blue light when performing a special attack. According to Alfonse, "the stones in the hilt burn like white flames".

Alfonse needs to have 5-star rarity in order to learn Fólkvangr as a weapon skill.

In Norse mythology, Fólkvangr is a field in Asgard where goddess Freyja rules over half of those who die in combat. 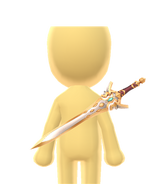