None
[view]
Faceless (ノスフェラトゥ Nosuferatu, lit. Nosferatu) is an enemy-only Monster class that is first introduced in Fire Emblem Fates. Muscular humanoid beasts summoned into existence through fell magic, the Faceless employ their fists to clobber their foes.

Faceless are monsters created through Dark magic. They were originally created by the kingdom of Nohr in response to Mikoto setting up a barrier that mentally influences Nohrians into losing their aggression towards Hoshido. Having no minds of their own, the Faceless are unaffected by the barrier and can thus embark on attack rampages. However, unless controlled, the Faceless often ignore orders and as a result, their destruction is limited to a specific area.

Despite this, Faceless apparently have a "soul", as some of them can be encountered working alongside ruffians, are Vallites and one can even serve as Corrin's adviser in their castle.

Faceless have been known to infest the Woods of the Forlorn in Nohr and often kill unsuspecting people who wander through the forest.

Magic users can bend the Faceless to their will using Dark Magic taught in Nohr. Iago, Leo and Rhajat have all displayed an aptitude for compelling the Faceless to submit to them. This is also shown in skirmishes where Faceless can appear and fight alongside ruffians, and the fact that one can be appointed as a My Castle advisor. However, a lack of control over the Faceless can result in them attacking anyone, even their summoner, as shown in Rhajat's case.

In battles, Faceless always come with either Shackled Fists or Gauntlets as their weapons. They may also come with a wide range of skills, notably Seal Stat skills along with post-battle damage skills like Savage Blow. On Hard and Lunatic Mode, Faceless may also carry Self-Destruct on them.

A group of Faceless also appear in Chapter 4, where they attack Hinoka and Sakura on the slopes of a snow-capped mountain. Fortunately, Corrin, Kaze, Rinkah and Ryoma successfully clear out the group and save them before they are killed.

The Faceless make their first appearance on this route in Chapter 18, where Leo ambushes the Hoshidans at the Woods of the Forlorn, summoning a group of Faceless to assist him in battle.

During Chapter 20, Iago ambushes the Hoshidans at Fort Dragonfall by using new magic given to him by Garon to reanimate the dragon of the fort, and causes stomach acid to appear as a result. Bored that the stomach acid will take too long to kill them, he decides to summon a horde of Faceless to hasten their deaths before teleporting out.

The Faceless make their first appearance on this route in Chapter 7, where Corrin, under Garon's orders, heads for the Ice Tribe Village to surpress their rebellion alone. Walking through the Woods of the Forlorn, they are ambushed by some Faceless and are almost killed were it not for their retainers' help. At the end of the chapter, it is shown that Iago had summoned the horde to kill them.

They later make an appearance in Chapter 21, where Iago yet again summons another horde of Faceless (also adding a few Stoneborn in the mix) to kill Corrin and their allies. The summoned horde takes out a group of Hoshidan soldiers stationed at the stairway. During the escape, a Faceless manages to sneak up on Corrin, but Lilith takes the fatal blow instead.

A final group of Faceless appear in Chapter 26, summoned by Iago again, and are either killed or ignored depending on the player's decision.

On the Revelation route, Anankos displays the ability to freely turn his servants into Faceless if they fail him, one that he exercises on Anthony.

In Mozu's Paralogue, a group of Faceless launches an attack on her village, devastating it and killing everyone except for Mozu, who manages to run and take cover in a forest. The Faceless eventually spot and prepare to kill her, only for their attempt to be foiled when Corrin's forces enter the scene to rescue her.

In Rhajat's Paralogue, after years of research, she finally succeeds in learning how to summon Faceless. However, her lack of control causes them to go feral and attacks the player's army. After she and her Faceless are defeated, Hayato forbids her from summoning them again. As she is about to leave her Deeprealm, one of her remaining Faceless suddenly appears and nearly kills her. Thankfully, Corrin makes a timely rescue but this inadvertently causes Rhajat to be fixated on them, just like how a certain Plegian dark mage gets fixated to the avatar of Fire Emblem Awakening.

In Boo Camp, news of a haunted mountain has caught the attention of Felicia or Jakob who notifies Corrin of its existence. Worried of the threat the Faceless may pose, Corrin and their forces head to the mountain to take down the hordes of Faceless. After the battle, though Felicia and Jakob hope that they do not not return, Corrin enjoyed the battle and saw the extreme amount of combat experience gained and hopes to return later for more training.

The term "Nosferatu" is an archaic Romanian word that is synonymous with "vampire".

Concept artwork of the Faceless from the Special Edition artbook.

Concept art of an unmasked Faceless from Fates

Faceless as a Nohrian Soldier in Fire Emblem 0 (Cipher). 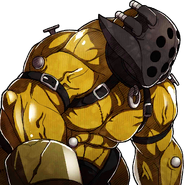 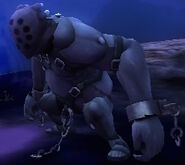 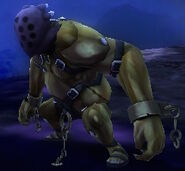