Sarah Blandy
[view]
“I'm scared of when you grow up. Will you still play with me? I never want you to leave me! I want to play tag and other games.”
—Fae in a support conversation with Sophia

Fae is a playable character in Fire Emblem: The Binding Blade. She is a Divine Dragon child from the hidden Manakete village of Arcadia.

True to her appearance, she is childish and naïve. Despite this, she is several centuries old. Because she is a full blooded dragon, she ages very slowly, even more so than Sophia (who is a half-dragon).

Fae can be found in the house in Chapter 22 of Eliwood's story or Chapter 23 of Hector's story in Fire Emblem: The Blazing Blade, making a brief cameo. She is alone there watching the house. She reveals that there is treasure buried in the sand near the bones and implies that she encountered Pent, telling him about the treasure. Her name is only mentioned if Hawkeye enters the house, in which case, she will tease him about his habit of saying "Is that so?" and reveal information about the buried items.

When Roy first arrives in the hidden village, Fae wants to go with them but is forbidden to do so. Despite the guardians of Nabata watching over her, first Hawkeye, then his daughter Igrene, Fae sneaks out and is captured by Bern. She is saved by Roy later on and fights with the army using her Divinestone.

Although Fae is an extremely powerful unit with very high growth rates, she faces many perils. Her base HP and Speed are all very low so even if physical units do poor damage against her, she's still getting doubled which adds up very fast due to her low base HP. Furthermore, her weapon only has 30 uses and cannot be repaired which limits her combat even more. Lastly, she has very low movement which means getting her to the frontlines is hard without another unit ferrying her. Many players will point out that she's required for the final chapter but it's very easy to have another unit rescue her and move as there aren't many enemies on the map and reinforcements appear somewhat late and have trouble catching up.

However, she has unique utility in stopping long-range magic (siege tomes and status staves) users dead in their tracks, as her high RES boost from her Divinestone gives her enough to take no damage and also makes her great at dodging status from staves such as the Sleep staff, making her very useful in baiting them out (she has to be last in the deployment order for this to work though, due to how enemy status staves users' AI works in The Binding Blade).

Divine Dragon
A surviving Divine Dragon with the nature of a child and very little life experience. Appears in Fire Emblem: The Binding Blade.

Holiday Dear
A young dragon from Nabata village. Her excitement for her first winter festival cannot be contained. Appears in Fire Emblem: The Binding Blade.

Childlike Dragon
Young Divine Dragon who has lived her life hidden in Nabata. She is loved and revered as the guardian of Arcadia. Appears in Fire Emblem: The Binding Blade.

Conversation in the house on Chapter 22

(if any of the Player Units visited the house)
Fae: You know what? I'm watching the house all by myself. Do you know how to do that? You have to sit and be good. So that's why I'm here. What are all of you guys doing? Are you hunting for treasure, like that other guy? Let me tell you a secret. There's something good buried near the bones. I know stuff like that.

Fae - Divine Dragon (神とよばれし竜 Kami to Yoba Reshi Ryū lit. The Dragon That is Called A God)
"After returning to Nabata, Fae was never heard of again. Many historians today voice their skepticism whether she really existed at all…"

Fae is illustrated in the trading card game Fire Emblem Cipher with the following cards: 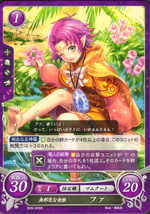 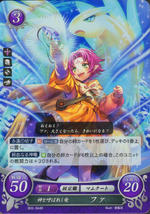 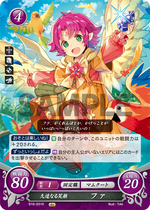 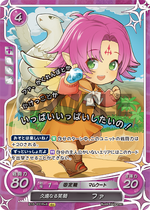 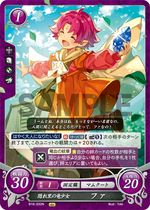 "Fae" is variant of the name "Fay", derived from Middle English faie meaning "fairy". It appears in Geoffrey of Monmouth's Arthurian legends in the name of Morgan le Fay. It has been used as a given name since the 19th century. In some cases it may be used as a short form of Faith. Also, "fey" means magical, fairylike, strange and otherworldly.