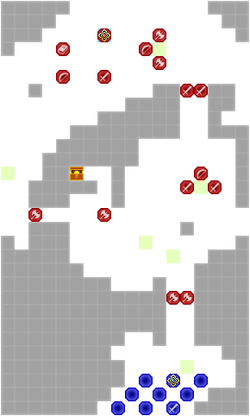 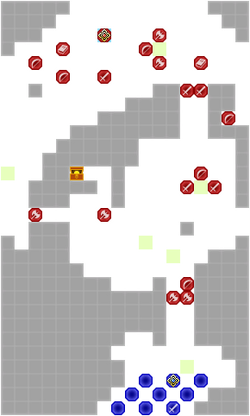 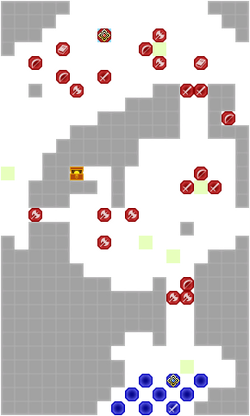 Chapter script
[view]
“As you have already been notified, your mission is to subdue some bandits. Our students have been learning about combat through study, but this is a precious opportunity to provide them with practical experience... In short, this is no mock battle. You must be prepared for anything. ”
—Seteth

Familiar Scenery is the second chapter to Fire Emblem: Three Houses. It is the first one to allow you to use all of your student units in a single battle and introduces most of the mechanics of the Garreg Mach Monastery along with introducing the Divine Pulse feature.

Seteth assigns the first formal mission to Byleth and their House for the month. Bandits have sprung up in Zanado, the Red Canyon, and it is their job to quell them with the Knights of Seiros there as support should the students require their assistance. Though Jeralt is once again a Knight of Seiros, Rhea forbade him from assisting them and he reminds Byleth to be wary of her.

At the end of the month, Byleth and their students depart to Zanado to face off against the Bandits, lead by Kostas. For the students, it is their first live combat scenario, meaning it is their first time that they will have to kill an individual. The students handle their first kill in various ways, but ultimately the bandit gang is quelled.

In addition to the eight characters chosen by their respective house, Byleth can also use the first eleven to twelve in-game months attempting to recruit students from other houses, thus expanding their roster. Five characters cannot be recruited outside of their native house, those being:

Once the player has reached the start of Chapter 3, they may begin to recruit students from the other houses. In order to recruit a student, Byleth must reach a certain subject proficiency rank and have a certain total in a specific stat to entice the student into entering their class. The rank and total respectively vary between students. Byleth can lower the requirement based on their Support level with the student; Subject Proficiency by one stage (C → D+ → D) and the required stat by 20% for each support level. If playing New Game+ Byleth can automatically recruit any student if they use Renown unlock their A-Support with that student at any point.

If Byleth has a B-Support unlocked with a student, there is also a small percentile chance that the student will directly request to join their house during a Tutoring week even if their stat and subject requirements have not been met.

Sylvain and Hilda are both recruitable, but both have very unique quirks involved:

If the Expansion Pass has been purchased, the Ashen Wolves house could be recruited immediately by the progression of the side story. The students are listed in below.

The staff of the academy are also recruitable, but will only require Byleth to reach a certain level or higher and a certain chapter. These will be noted in future chapters when the staff character can be recruited.

On maddening, all archers have Poison Strike and all thieves have Pass. They approach in groups of three at a time until most of them are dead. As with many bosses in maddening, Kostas can move, and does so when someone moves into his attack range.

This Month Only Quests Edit