Pegasus Knight
[view]
“So I guess my 20,000 gold wage really is the highest here... Well, who should be surprised? I am quite simply the finest mercenary that money can buy...”
—Farina in a support conversation with Dart

Farina (Freya in the Italian version) is a playable character from Fire Emblem: The Blazing Blade. She is a famed member of the 3rd Wing of Ilia's Pegasus Knights. She is the middle sister of Fiora and Florina. She only appears in Hector's Tale and joins in that version of the story.

When she was a pegasus esquire, her squad almost died in a practice maneuver. However, Fiora left her own mission and arrived to save them, which resulted in her being charged with a massive termination fee. While Farina says that Fiora should have left her to die to preserve her own honor, she is also grateful to her for her actions and wishes to help her pay off the loan.

Some time before the storyline, Farina got into an argument with Fiora that caused the two of them to separate. She makes her first appearance in Chapter 25 of Hector's Tale and offers to be hired by Hector for the large sum of 20,000 gold. Whether or not she is paid and recruited is the choice of the player.

If she achieves an A support with Hector, she will marry him in the Epilogue. In this scenario, she will become the mother of his daughter, Lilina.

Farina appears to be miserly and crude at times, but she does care deeply for her friends and family. She is very greedy and seems to be obsessed with money. She also has a high opinion of herself, as she believes that she is the finest mercenary that can be bought with money. Although Farina is on poor terms with Fiora due to their past, she gives her a portion of her 20,000 gold payment to pay off the termination fee in their support conversations.

Description: A member of the 3rd wing of Ilia's pegasus knights.

Farina has a very impressive strength growth, but her cap is very low and she will max it before long. Her Skill and Speed are lower than her sisters', but she has higher defense. Her Resistance is alright, but nothing special for her class. Her Luck is decent, as well as her HP. Her Con is too low to wield even most swords, so she may have trouble doubling Swordmasters when using lances, unless she uses a Body Ring. Her joining time is very late, but she is not of the Est archetype. However, this makes her an excellent candidate for the Afa's Drops, if the player chooses not to level Nino.

While her recruitment costs of 20,000 gold might look like a considerable drawback, her utility as 4th flying unit are without a doubt worth the price, especially since money shouldn't be much of a a problem after the Dragon's Gate in a non-ranked scenario. It's easy to give her level-ups during her recruitment chapter, and she can promote at base, further increasing her movement and durability, making her an excellent choice for Night of Farewells and Cog of Destiny where land units might have trouble advancing fast enough to reach villages or threats such as status-staff-users or long range tomes.

Farina's supports with Florina, Fiora, Dart, and Dorcas are very useful, as they will give her additional attack power to break down the opponent with. Florina in particular will boost both unit's attack and defenses, which is very handy for her, considering that Florina's growth rate in strength and defenses are very shaky and inconsistent.

Speak to her in Chapter 25 of Hector's story mode and pay her. It should be noted that if the player talks to her a second time, even if its the turn after the first conversation, and the player refuses to pay her she will leave and it will become impossible to recruit her. Oddly enough, talking to her with her two sisters Florina and Fiora will have no effect on her payment.

Farina far surpassed her duties as commander of the Pegasus knights of Ilia. Her skill earned her high fame, as well as high prices!

Hector succeeded the throne as the marquess of Ostia, but the pain of his brother’s death weighed heavily on him. His beloved Farina gave him comfort and helped him become an enlightened leader.

Farina’s love for Dart compelled her to stay in Lycia. She visited Badon often and flirted with Dart at every chance. He never knew how serious she was when she told him that a female pirate would be quite profitable!

Farina stayed in Caelin as a mercenary, hoping to stay close to Kent. When Lyn abdicated Caelin's rule to Ostia, Kent resigned his commission and served at Farina's side as a mercenary in Ilia.

Farina is illustrated in the trading card game Fire Emblem Cipher with the following cards: 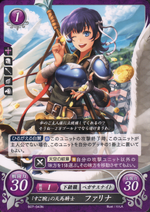 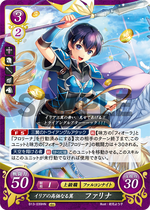 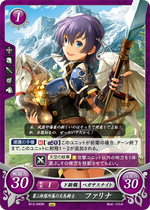 Farina's name is a pun with her sisters' names; while Florina and Fiora's names mean 'flower' as in a blossom, the name 'Farina' means 'flour' as in the principle ingredient for bread, in Latin and Italian. This could also refer to Farina's preoccupation with making money, by using the slang term 'dough.'

Artwork of Farina in Fire Emblem 0 (Cipher) by I☆LA.

Artwork of Farina in Fire Emblem 0 (Cipher) by I☆LA.

Farina as a Pegasus Knight in Fire Emblem 0 (Cipher).

Farina as a Falcon Knight in Fire Emblem 0 (Cipher).

Farina as a Pegasus Knight in Fire Emblem 0 (Cipher). 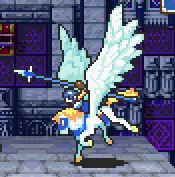 Farina as a Pegasus Knight 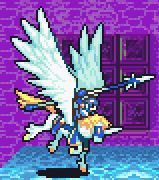 Farina as a Falcon Knight