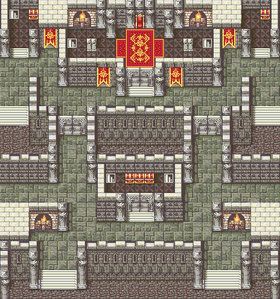 Chapter script
[view]
“Myrrh returns safely to Ephraim's side. A noble warrior to the end, Selena fought with great honor, never once using Myrrh as a hostage. Ephraim renews his vow to pierce the veil of mystery surrounding the Grado Empire. Selena is added to the list of innocents who Grado must account for. The center of the Grado Empire. Emperor Vigarde should have been here, but...”
—Opening Narration

Father and Son is Chapter 14 of Fire Emblem: The Sacred Stones when playing Ephraim's route. This chapter has a Secret Shop.

While strategies vary in this chapter, the seemingly best strategy for unit preservation is to start out with all of the slower units in the group on the left and the fastest on the right. If you have a Restore staff, it is highly recommended because of the Berserk staff the two Druids wield in Vigarde's room, the Bishop wielding the Sleep staff to the west, and the Bishop wielding the Silence staff to the east. As there are Archers and a Sniper with Longbows, it is your pick if you want to move your flying units to that vicinity, as the Archers on the two sides won't move unless they can attack a unit, and the two Archers and Sniper in the middle will be unable to move around with a friendly flying unit there.

Rennac spawns in the north-eastern ring. He will immediately loot the chest next to him, before proceeding to the north-western chest. He will not bother with the cluster of chests in the middle. As he will save a lot of time in opening chests and doors and has the only Member Card (the one he has makes it easy to get, as the other method is extremely time consuming), it is highly recommended to recruit him. DO NOT use Ephraim to start a conversation, as Rennac will demand 10,000 gold to join. Have L'Arachel talk to him instead, as Rennac will reluctantly join your army at no cost.

Push through the enemies as quickly as possible. Note that all of the knights are equipped with Javelins, so use high strength and speed units to get rid of the two groups at the gates to the sides. Watch the range of the Archers and Sniper, as they're all equipped with Longbows. Upon rushing the gates and killing all enemies within range, players should be incredibly careful at this point.

This is due to two Druids in the throne room carrying Berserk staves. If their staff hits, the affected unit goes in a rage, searching and attacking any unit. This can cause the death of a weaker unit brought along when the berserk unit attacks them. To counter this, either send in a unit with very high Resistance, or simply bait them with Phantoms. Ewan is a good choice if invested into, as the Druids will not attempt to use Berserk on him, or as a Summoner, the phantoms will barely deal any damage if they spawn with an iron axe.

Vigarde is the only threat in this level, possessing high stats. However, he's only equipped with a Spear, which has 15 uses. If Ewan is a Summoner, you could simply summon phantoms to until Vigarde's spear breaks, after which he has no means to defend himself (this can also be used for experience abusing). If he is not a Summoner, your best best is to use anti-armor weapons alongside high accuracy due to Vigarde's moderate speed and throne bonuses.

The location of the secret shop