Faye is a playable character who appears exclusively in Fire Emblem Echoes: Shadows of Valentia. She is 18 years old.

Faye is one of Alm’s childhood friends from Ram Village. Growing up alongside Alm, Tobin, Gray, Kliff, and Celica, the group were incredibly close. One day, the children saw several knights approach the village, the first ones they had ever seen. These knights were led by Slayde, who attempted to kidnap Celica and kill Faye. Thanks to a an attempted intervention by Alm, and a timely rescue by Mycen, the children were saved. This event caused Celica to leave the village for her safety. Over the course of the years, Faye trained under Mycen in combat. Being so close to death was a traumatic experience for Faye, and her love and obsession over Alm grew since that day.

As a Cleric, Faye has several White Magic spells that separates her from the two in Alm's route. She learns Physic at a relatively early level when trained and well before Tatiana is recruited, allowing her to heal from a distance safely. Even between all Clerics in game, she is the only one who learns Rescue to pull wayward allies back to safety. The only other characters who can learn Rescue are Atlas if he is a Sage, as well as Shade, who is a DLC character, thus giving her almost an exclusive usage of the skill once both armies merge. However, her most notable unique spell is Anew, essentially letting her assume a Dancer-esque role, though she learns the skill relatively late in the game. While the hefty cost of 24 HP may be steep in certain situations, the ability to transfer her turn to more offensively capable units may make the trade off worth it in certain situations. Overall, Faye's bonuses and uniques in her Cleric White Magic spell list give her tremendous benefits and prevent her from being overshadowed by the others.

Though impossible for her to actually use the weapon in her native game, Faye is a Bow infantry unit who has one of the most confusing stat spreads and original starting weapon combo upon her release. She lacks offensive presence due to a mediocre Atk and very poor Spd that leaves her unable to double a vast majority of units. In exchange, she has excellent mixed bulk for an infantry unit, giving her the potential as a ranged wall, especially when she was improved months after her release.

Faye is the sole unit in all of Heroes currently with access to the Firesweep Bow which prevents enemies from counterattacking her unless they pack Null C-Disrupt. As mentioned above, Faye’s defensive orientation does not sync well with Firesweep Bow, which is better off on hyper-offensive units. This makes her good for a fodder unit to grant this rare weapon to someone else.

She later received a Preferred Weapon, Bow of Devotion, granting her a +4 boost to her four main stats whenever she is attacked by any ranged unit. With its refined Quick Riposte effect that activates so long as she is over 50% HP at the start of combat, Faye is a powerful ranged check meant to bait ranged units into attacking her. While her Atk may not be the highest, she can supplement this with skills to maximize her damage and bring out her true potential.

Noontime restores her HP based on 30% of the damage she dealt when she activated it. With her mediocre Atk, she is unlikely to get a huge return on it. Wings of Mercy allows Faye to teleport adjacent to a badly injured ally which has applications for certain formations, but is more of a gimmick for her in most instances. Bow Experience boosts the EXP of bow allies on her team when she is deployed with the skill equipped. It has short term benefits on getting allies to Lv. 40, but it is useless afterwards.

Faye counters ranged units with ease, but her combat against close range units are poor as Bow of Devotion does not boost her defenses against such opponents and even with her bulk, most can run through her uncontested unless she is running Close Counter. Even then, unless facing off against a flying unit, her low Atk does minimal damage against most who have a decent level of physical bulk themselves. While she gains bulk against them, she is still subjected to a Weapon Triangle disadvantage against Raventomes like both Mage Robins, Sophia, and Lyon, whom further weaken her already low offense.

Faye’s Bow of Devotion already gives her two of the most important defensive effects she could ask for, especially the built in Quick Riposte. Draw Back allows Faye to pull allies out of danger or Reposition to place an ally on the other side of herself so she can bait a ranged unit. Her higher res makes her an excellent Iceberg user to power up her attacks. Skill A ideally should be Distant Defense as when that is paired with her weapon and a Distant Defense Seal, Faye can achieve a massive +16 to both defensive stat increase against ranged units which is comparable to most Armor tanks. If worried about being attacked by direct attacking units, her decent bulk does allow her to use Close Counter, though she does not take any boost from her bow. She can however use Fierce Stance for her Seal for either Skill A used instead just to provide some Atk boost. Null C-Disrupt prevents enemy Distant Counter effects and neutralizes Dazzling Staff effects, making her harder to punish by those skills. Budget options include Chill skills or Renewal to keep her healthy. Skill C is ideally Attack Smoke to lower enemy Atk so they have a harder time taking her down.

Drawn Heartstring
A young girl madly in love with Alm. Eager to express her growing feelings to her beloved at the Day of Devotion festival. Appears in Fire Emblem Echoes: Shadows of Valentia. 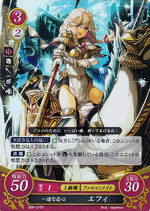 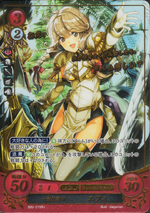 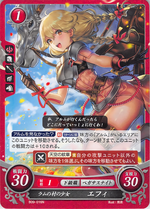 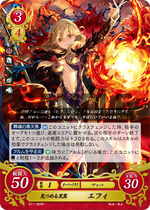 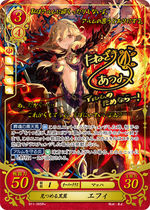 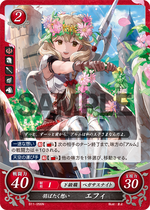 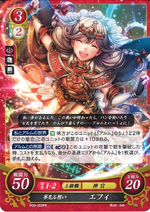 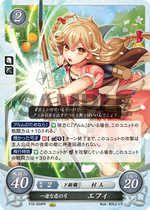 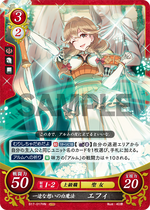