Bow Fighter
[view]
“Yeah, well, I caught a guy making fun of you. He said 'It's no wonder you became a thief with a pirate for a mum'. Of course, I floored the guy for saying that.”
—Febail talking to Patty

Febail is a playable character from Fire Emblem: Genealogy of the Holy War. He is the son of Brigid, and the older brother of Patty. He is the inheritor of the holy Yewfelle, which is passed down to him from his mother. He works as a mercenary for Bloom in Chapter 8, but Patty manages to convince him into joining Seliph's army. He will inherit the dukedom of Yngvi if he does not inherit his father's homeland. His substitute character is Asaello.

At one point, Febail was left in an orphanage in Conote. He took care of the orphans like little siblings and worked as a mercenary to help out the orphanage.

Febail's talents are eventually discovered by Bloom, who hires him to take down the Liberation Army. Despite his worries, Febail goes through with it. He can be recruited by Patty, who reminds him that the Empire had orphaned the kids they were taking care of.

Having learned of his lineage from Lewyn, if Febail does not succeed his father's house, he will inherit Yngvi. Seven years after the holy war, Febail reunites with his mother.

Much like his sister, Febail has taken up several heavy responsibilities throughout the course of his life. Febail is observed to be a compassionate and caring youth, as can be seen from the immense love he has for the orphans he took under his wing.

He is also rather protective of his sister and his long-lost mother, Brigid, and will, without hesitation, turn aggressive, should anyone dare to mock their good names, best shown in his confrontation with his cousin, Scipio.

In Chapter 8, Patty can recruit Febail by speaking to him.

In Chapter 8, Febail may speak to Seliph, but nothing will result of it.

In Chapter 9, Febail may speak to Patty, and Patty will gain one point of luck.

In Chapter 10, if neither Febail nor Lana has a lover, he may speak to her, whereupon she will gain three points of HP and 100 love points with him. The same happens if he speaks with Muirne in the same chapter.

In the Final Chapter, after Dozel Castle is captured, if Lana and Febail are lovers, she may speak to him, and he will gain three points of resistance.

Febail will always be able to wield Yewfelle regardless of his father's identity. He also possesses the Pursuit skill, making him a useful unit the moment he joins Seliph's army. On the other hand, Yewfelle is sadly one of the weaker Holy Weapons, by nature of Genealogy's map design favoring large swarms of weak enemies. He is fairly accurate with Yewfelle (though Yewfelle itself isn't very accurate), and most enemies Febail targets will be killed fairly easily, but he will be unable to counter enemies unless they wield bows or he is carefully positioned. Febail is also footlocked, which limits his range significantly. He is quite survivable with most pairing setups, thanks to solid defensive stats and the inherent Renewal skill that Yewfelle provides, so if nothing else, he should not be too worried about being swarmed by enemies.

In terms of parents, Febail does not tend to vary much; his offense is about as good as it could possibly be for a bow-user already, and he inherits weapons from his mother. Consequently, most pairings focus on Patty instead, and her two most popular options, thankfully, work well for Febail. Dew provides the Bargain skill, making it easier to repair Yewfelle, while Chulainn offers extremely high Skill and HP growths, which improve Febail's accuracy and durability.

Thanks to the Yewfelle granting +10 to Strength, Febail has the distinction of having the highest possible attack power of any of your units, tying with Altena when she wields the Gáe Bolg. With a Power Ring, his base attack with the Yewfelle is 72. Julius's Loptous halves that down to 36, meaning he deals increments of 11 damage to Julius, far more than any other unit - Shannan, Seliph, and Ares all do increments of 6, 5, and 4 respectively (that's with a Power Ring; without, they're stuck at 1 like everyone else). If you don't use Julia, Febail and Altena are your strongest units to kill Julius. On the other hand, Seliph and Ares gain the benefits of having substantive Resistance, meaning they're not afraid of dying to Julius. Most Fathers will leave Febail with enough hp to tank one non-Critical hit from Loptous, but be sure to bring Seliph and units with Charm to boost Febail's Avoid.

"And finally, at Grannvale, Returned respectively at Yngvi, Febail and his wife, [Lover]."

Febail is illustrated in the trading card game with the following cards: 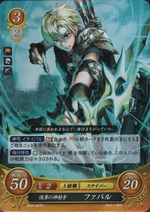 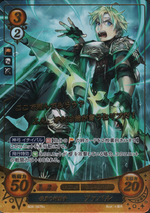 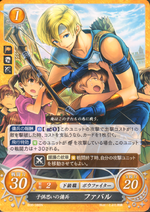 Febail's name is possibly derived from Febal of The Voyage of Bran, originating from Irish mythology.