Pegasus Knight
[view]
“Father, you are so cruel! When I first saw you at Rivough Castle, I could hardly believe my eyes! I was so happy... I was in tears! But you wouldn't speak to me! Do you have any idea how horrible that's made me feel!?”
—Fee, to Lewyn if he is her father in Genealogy of the Holy War.

After her mother's untimely death, Fee meets either Arthur or Amid and departs Silesse with them in order to encounter her brother Ced, who left the kingdom in search of their father. Upon hearing news about the rebellion lead by Seliph, she decides to join he rebel's army, as she wishes to become a holy warrior like the fallen hero Sigurd, whom Erinys told her stories about when she was a child.

She is an energetic pegasus knight in training, and her pegasi is named Annand after her late aunt. In Thracia, it's revealed that that the pegasus knight Karin that serves the house of Silesse is her retainer, or they are at least close friends as the knight says to Ced that Fee send her as she is worried about him. In her conversation with Amid or Arthur, it's pointed that Fee tends to be somewhat careless in battle. If Erinys is paired with Lewyn, Fee is shown the be greatly hurt by Lewyn ignoring and leaving their family, and she snaps backs at her father when they have a conversation in chapter 10.

Should Fee be paired with Seliph, she will marry him and will became the empress of Grannvale.

Fee exudes a cheerful and positive demeanor. Her brother Ced notes that she is very similar to their mother Erinys, as Fee never turns her back to someone in need. She is often very excited and can be reckless in battle, Arthur and Amid warn her that she should be more cautious. She is also a dreamer and wants to find a romantic partner to settle once the war is over.

If Lewyn paired up with Erinys, Fee will reveal a more emotional side of herself, as she lashes out at him for leaving her mother to die while waiting for him to return to Silesse.

* Any advancement in levels for the selected weapon types is dependent on the identity of Fee's father.

In Chapter 6, Seliph may speak to Fee, but nothing will result of it.

In Chapter 8, if neither Arthur nor Fee has a lover, he may speak to her, and Fee will gain three points of HP and 100 love points.

In Chapter 8, after Ced is recruited, Fee may speak to Ced, and she will gain one point of luck.

In Chapter 10, after Rados Castle is captured, if Lewyn is Fee's father, Seliph may speak to her, and she will gain five points of strength.

In the Final Chapter, after Friege Castle is captured, if Fee's lover is either Oifey, Seliph, or Arthur, she may speak to him, and he will gain three points of skill.

In general, like her brother Ced, Fee is a very difficult character to "ruin" through parentage, since she will always possess Pursuit, her flight abilities, and the items inherited from her mother. This makes her a decently strong offensive unit with a great deal of mobility, making her helpful on negotiating terrain-heavy maps and rescuing villages. After promotion, she can even gain staff skills, though her rank is too low to do more than basic healing. Like her mother, Fee's growths are generally unimpressive, but her solid Pegasus Knight bases and large pool of usable weapons after promotion tend to more than compensate. She is a decent user of the Brave Lance and magic swords, especially after promotion when she gains a hefty boost to Magic, and though she is not by any means a tank, she can generally be counted on to survive hits.

There tend to be two ways to handle Fee's parentage: focusing on Ced, and focusing on Fee. Thankfully, as mentioned, Fee's core kit is strong enough that any additional benefits are simply extra, so she tends to do well even in Ced-focused pairings. Lewyn is the most obvious starter, providing the Adept and Critical skills to significantly boost Fee's offense, along with high growths in HP and Speed due to Forseti blood. The noticeable boost in Magic encourages a magic sword-focused route, and the added skills will handily compensate for Fee's low Strength growth. Claud is an intriguing option for a supportive Fee; he passes down no skills, but his Bragi blood boosts Fee's Resistance and Magic, and more importantly, gives her an additional staff rank. This opens up a much wider pool of staves Fee can use, such as Warp, Restore, and Physic, which she makes use of extremely well with her high Movement.

When ignoring Ced entirely, physical fathers tend to be the preferred option; though Fee will only inherit half of her father's Strength growth, it can still help her secure some extra points. Jamke and Naoise pass down solid growths along with the Critical and Charge skills, which she makes decent use of when given a Brave Lance. Lex is a good pick to improve her survivability, thanks to his Neir blood boosting her Defense and his Paragon skill making her easy to level, while Vantage can help her ward off enemies with a strong weapon in hand. Arden can also work as a backup to Lex.

Fee is illustrated in the trading card game with the following cards: 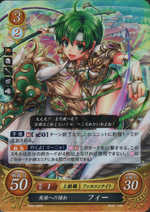 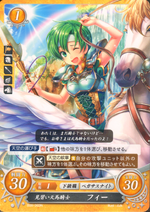 Fee is the french and german word for "fairy". The unisex name can also be derived from the name "Felicia", "Felicity" and its variations, meaning happiness and "good luck".