Fenrir is a high-levelled Dark tome in the Fire Emblem Series, and is generally wielded by end-game enemies. Owing to the sheer Might that it possesses, this tome is hence usually exorbitantly-priced.

The animation for Fenrir in the SNES games depicted a beast's head of some sort appearing in the background.

In the GBA games, Fenrir was depicted as summoning wailing spirits and purple flames which eventually converge on the target.

In Genealogy of the Holy War, Fenrir is a ranged tome, much like Blizzard and Meteor. Despite being a highly inaccurate tome, Fenrir is capable of inflicting devastating amounts of damage if the unit in question is unfortunate enough to be hit. Like all Dark magic, it is an enemy exclusive tome, though unlike other tomes users with it equipped are incapable of movement.

In Thracia 776, Fenrir's durability has been lowered, but its might and accuracy have been greatly increased. In both damage and precision, Fenrir is the strongest of the seize tomes in the game and the only playable character who possesses the Dark Magic Rank to use it is Salem. There exists an enemy only variation of Fenrir, the poison tome which has a lower might and accuracy but inflicts Poison (condition) on the target.

In the Japanese versions of the GBA games, this tome is known as Nosferatu (ノスフェラート, Nosuferāto), and may only be used within one or two tiles away from a given target. The spell's description says it conjures "Freezing Flames" upon being cast.

Fenrir is reverted to a long-range spell in Radiant Dawn, where its Might is significantly lower than that of its predecessors from previous games in the series.

In Norse mythology, Fenrir, also known as Fenris Wolf, is the ferocious wolf son of Loki, and is bound to Odin's throne by the rope Gleipnir. When Ragnarok, the Apocalypse, eventually takes place in the future, Fenrir is prophesied to break free of Gleipnir's binding powers and kill Odin, the chief god. Fenrir is then predicted to meet his end in the hands of Víðarr, the son of Odin.

Fenrir, as it appears in the third series of the TCG.

The full background accompanying the spell in FE4.

Kutuzov casting Fenrir on Fee in Genealogy of the Holy War. 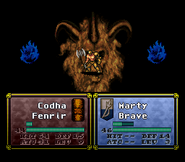 Map animation of Manfroy casting Fenrir on Leif in Genealogy of the Holy War.

Animation of an enemy Druid casting Fenrir on Rutger in The Binding Blade.

Pelleas casting Fenrir on an Order Warrior in Radiant Dawn.