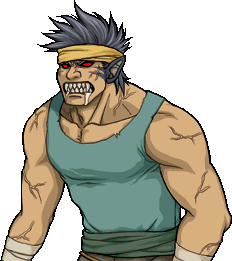 “Transforming laguz into Feral Ones dramatically shortens their life spans. It destroys their sense of self, and they do nothing but fight until they die!”
—Tormod about the feral ones.

The term "Feral One" is given to any laguz who have been transformed by the effects of a potion created by Izuka. They are able to remain in beast form for extended periods of time, but lose all sense of reasoning. In addition, their life span is greatly shortened. As seen in Fire Emblem: Radiant Dawn when Izuka administers the potion to the tiger laguz Muarim, a period of time passes where the recipient "becomes" a Feral One. It is implied that the potion must be given regularly to Feral Ones to keep them under control. The potion can also be given to beorc—it increases their fighting strength but harms them mentally.

The Galdr of Rebirth is able to return Feral Ones to their natural state (as seen with Rajaion), as well to restore the condition of beorc that have been given the potion and can also save laguz that are partway towards becoming Feral Ones (Renning and Muarim have been saved, respectively).

The Feral Ones first appear in Chapter 14 of Fire Emblem: Path of Radiance, under the control of Gashilama. They are later seen at Gritnea Tower, the place where Izuka’s experimentation created the first Feral Ones. In Radiant Dawn, they do not appear until Chapter 4-5, where Izuka summons them to protect him from the Hawk Army. Following Izuka’s death, no further Feral Ones are seen, and it may be that no more exist.