Not to be confused with Fargus

Free Knight
[view]
“I'm Fergus, a traveling mercenary. Back in the city, I saw some soldiers harrassing a girl, so I went in to stop them. And the next thing I know, I get thrown in here. Great, huh?”
—Fergus

Fergus is a playable character from Fire Emblem: Thracia 776. He is a mercenary of mysterious origins, with rumours claiming that his father is Beowolf and his mother a Conote noble. Should these rumours be true, Fergus would be the half-brother of Diarmuid and possibly Nanna.

Fergus was imprisoned in the Manster dungeon after beating up a group of soldiers who harassed the Pegasus Rider Karin.

Locked up in the same cell as Leif and Karin in Chapter 4, Fergus strikes up conversation with the prince and befriends him. When the Magi Squad later breaks into the dungeon to rescue Leif, Fergus and Karin flee with him, thereafter joining the Fiana Freeblades.

Fergus then goes on to continue supporting Leif in his cause to liberate Northern Thracia from the Grannvale Empire. He disappears without a trace thereafter, leaving nothing but a trail of rumours that can neither be confirmed nor disconfirmed in his wake.

Although Fergus has a strong sense of justice, he is also portrayed to be reckless at the same time, as he resorts to physical violence in response to seeing Karin harassed by soldiers from Manster.

Despite his recklessness, Fergus adopts a carefree, placid attitude on the whole, a fact that sees him being able to casually take a nap even while being imprisoned. He is also a bit of a flirt, cheekily asking Karin if she is attracted to him when she comments that everyone has their fine points.

Fergus is a powerful unit throughout the course of Thracia 776. In the beginning and middle sections of the game, he can hold his own well, as his high Pursuit Critical Coefficient of 5 allows him to obliterate enemies with critical attacks should he land a second strike.

Fergus shares a mutual support with another important unit, Karin. This support works to further increase his Hit Rate, Avoid and critical hit chance, and is especially useful in the early sections of the game.

Being a mounted cavalier unit with strong Constitution and a high Sword rank, Fergus is the natural wielder of the Brave Sword, which is very effective for capturing units.

Fergus' strengths are offset by his low Speed, which could prevent him from performing a pursuit attack against some units if his Speed is not high enough. He will thus benefit the most from the Sety Scroll, which will marginally help remedy his Speed growth.

"After the fighting was all over, Fergus vanished almost immediately. Was he an illegitimate son of the legendary knight Beowulf? A long-lost prince of the Conote royal family? Rumors persist about this mysterious figure, but with Fergus gone, the truth has been lost forever."

“Ah, how times have changed... I should be the last man out, not any of y'all.”
—Fergus's escape quote in Thracia 776

Fergus is illustrated in the trading card game with the following cards: 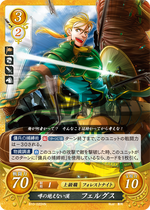 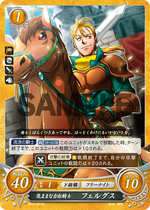 Fergus is an Irish, Manx and Scottish name meaning "man strength" or "virility". Likely from Fergus mac Róich of the Ulster Cycle.

Artwork of Fergus in Fire Emblem 0 (Cipher) by Mineri.

Artwork of Fergus in Fire Emblem 0 (Cipher) by Mineri.

Fergus as he appears in the TCG as a Level 10 Free Knight.

Fergus as a Ranger in Fire Emblem 0 (Cipher).

Fergus as a Free Knight in Fire Emblem 0 (Cipher).

A portrait of Fergus from the Thracia 776 Illustrated Works.

Fergus as a Free Knight in Thracia 776.

Fergus as an unmounted Free Knight in Thracia 776.