Fernand next encounters the Deliverance on the border between Zofia and Rigel, where Berkut intends to defend Rigel to atone for his failure in the Forest Crossroads. Despite their best efforts, Alm once again prevails against them, making Fernand convince Berkut to withdraw. However before the two retreat, Berkut breaks a mirror given to him by Nuibaba as a last resort causing ghostly hands to rise up and attack the Deliverance. While Alm is able to reverse the spell thanks the charm Celica gave to him, Fernand is visibly shocked at the magic and begins to question the true goal of Rigel and the Faithful.

After the death of Emperor Rudolf and the revelation that Alm is the Emperor's one and only son, Fernand goes into the Duma Temple where he finds Berkut desperate for power to defeat Alm and claim what should have been rightfully his. He witnesses as Berkut sacrifices Rinea, turning her into a witch, as payment to Duma for power and horrified to the point where he doesn't recognize his commander. Blinded by his new power, Berkut makes Rinea attack Fernand and mortally wounds him. Just as he nearly makes it to the entrance, he encounters Alm's group, who had entered Duma Temple to stop Duma himself. Fernand, on his death throes, pleads to Alm and Clive to stop Berkut and finally rids himself of all of the rage and hatred he held towards the common masses, realizing that he was blinded. Before Clive can do anything to save him, Fernand dies in his friend's arms.

Fernand is highlighted by his strong vengeful thoughts towards the commoners of Zofia. This was a result of an insurrection attack by the commoners on his family's estate that resulted in their deaths. This hatred was so strong that he was willing to abandon the Deliverance simply because Clive let Alm become leader whom he thought was a peasant at the time. He is also quite judgemental and withholding, as shown when he berates Alm and Lukas simply because of their social status. However, on his death throes, he realizes that these feelings blinded him from the truth and repents for his mistakes.

Prior to the tragedy, Fernand was a very blunt man, easily and freely speaking his mind about anything that went against his morals, such as Slayde's conduct at Zofia Harbor. Like Clive, he held a strong sense of duty for the Kingdom of Zofia. He was steadfastly loyal to Clive as his equal and was more than willing to aid him at any time for whatever Clive's endeavors may be, a sentiment that Clive reciprocated. Even after the tragedy, Fernand follows a code of honor as he was shocked and disgusted by Nuibaba's magic when used against the Deliverance.

Traitorous Knight
A noble of Zofia and part of the Deliverance until leaving to serve under Berkut. Appears in Fire Emblem Echoes: Shadows of Valentia. 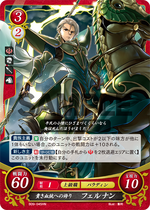 Fernand is a french form of Ferdinand, which means "bold to attain peace," and "brave traveler."

The germanic name is composed by the junction of the elements fridu, meaning "peace", or alternatively fardi, meaning "travel"; and "Nand", which means "bold, courageous".