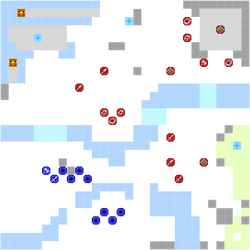 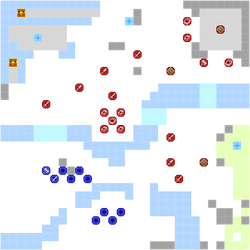 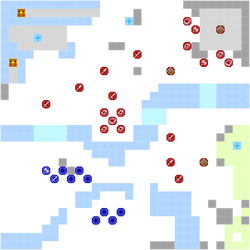 Byleth, Edelgard and 8 others

Chapter script
[view]
“The Black Eagle Strike Force, in its continued pursuit of Fodlan's unification, marches on Fhirdiad. Kingdom and church forces prepare to meet you at Tailtean Plains, a place laden with history.”
—Chapter description

Field of Revenge is the seventeenth chapter of the Crimson Flower route in Fire Emblem: Three Houses. This chapter takes place in the Tailtean Plains, and contains the mission Combat at Tailtean Plains.

Dimitri and Rhea discuss the current state of the war with the Adrestian Empire and Dimitri decides to personally intercept the Imperial forces at the Tailtean Plains since Fhirdiad cannot stand up to a prolonged siege. The two vow to allow each other to kill their hated enemies: Edelgard for Dimitri and Byleth for Rhea. Rhea again swears to take her mother back from Byleth. Meanwhile, Edelgard and Hubert correctly deduce the Kingdom's battle plan. Edelgard recounts how Seiros defeated Nemesis 1000 years prior to found the Church of Seiros and Loog defeated the Emperor of Adrestia in his time 400 years prior to found the Holy Kingdom of Faerghus on those very plains. Hubert suggests Edelgard stay off the front lines, but Edelgard refuses to back down.

The day before the final battle, Byleth pays a final visit to Jeralt's grave. Recalling his last words and his desire for Byleth to give their mother's ring to the one they love, Byleth can decide to propose to anyone they have an A-support with, gender permitting, including Sothis or nobody altogether. Afterward, at the Tailtean Plains, Rhea reveals herself to be Seiros and Dimitri vows to avenge those who have fallen at Edelgard's hands. The Imperials encounter the Kingdom army preparing to engage them, and Edelgard laments how far Dimitri has fallen in the five years since their time at the Officers Academy. Shortly after the battle between the two armies begin, Dedue reveals that he has taken hidden Crest Stones and given them to the soldiers, transforming the volunteers into Demonic Beasts, much to Dimitri's shock, disappointment, and disgust. Should fifteen turns pass or the player is in-range of Dedue, he will use a Crest Stone himself and transform into a Giant Demonic Beast. When the player approaches the east, reinforcements lead by Rhea - now Seiros - appear and intercept them.

Despite all this, the Adrestian Empire emerges victorious and Rhea orders the remaining Knights of Seiros to retreat to the interior of Fhirdiad. Depending on whether Dedue was engaged and defeated before transforming or not, Dimitri either dies in Dedue's arms or blames the Tragedy of Duscur on Edelgard before being executed by her. Edelgard briefly mourns over Dimitri's death and reveals that the culprits responsible for his huge hatred of her and the Tragedy of Duscur was Lord Arundel and those associated with him and after musing about being vastly different then she was years ago, vows to bring an end to the war with Byleth at her side.

You have three things to worry about at the start of the map: Sylvain's force, the enemies in the field on the west side of the map, and the Bolting mage and his friends. If you have any sort of flyer, it is highly recommended to eliminate the Bolting mage on turn 1; Warp/Dance/Rescue can all help get the flyer over for a Brave Lance/Axe hit, then Canto retreat back.

For the other two enemy sets, it's a race against time to kill as many of them as possible before they transform. Assuming you want to keep your own troops concentrated, you can choose between starting with Sylvain's group and rotating east-to-west, or crossing the shoals on the west before sweeping to the center of the map. Be careful; the threat ranges lie if an enemy is about to transform. Note that one minor thing in your favor is that if a soldier transforms but no Empire forces are in range, the Altered Demonic Beast will sit quietly in place until someone aggros it by moving into range or attacking it. So it's okay to let a few transform as long as you leave them be.

Sylvain (or the Kingdom General) is a Great Knight, so just like Gwendal in the previous chapter, his weakness is getting smashed by magic. He's got high attack power, but if you either bait him in to a tank or Warp / fly a unit with some magical offense near him, he should go down. Mercedes is a bit trickier, since she also has the constant stream of Pegasus reinforcements coming in near her. Since she has a Rafail Gem (occasionally halve damage), Miracle, and White Mag Avo +20, the only kill that is safe for Mercedes is overkill; she can take substantially less damage in practice than the combat prediction shows. However, you can sometimes lure her away from her starting defensive tile by wounding some Kingdom soldiers in the north-central section; she'll wander off to get in range to cast Fortify on them. This both reduces her impressive evade and leaves her defenseless, as she won't have Abraxas equipped. (If you recruited Mercedes, the replacement Kingdom General thankfully does not have a Rafail Gem, which renders attacking her safer.) Killing Mercedes will stop the reinforcements.

Dedue will transform into a giant Demonic Beast when you get too close to him. The correct answer to this problem is to go "nope" and drop a couple of Meteors on his head before he gets the chance. Just wandering over and doubling him with a Levin Sword works too. Killing Dedue while he's a Fortress Knight also has the benefit of not spawning the wave of reinforcements from his cutscene. Killing Dedue won't arouse the attention of Dimitri's guards, so is safe to do whenever you're in the area.

You have a few options for finishing up the map. You can charge Dimitri's fortress, trigger the Church of Seiros reinforcements, take out Dimitri, and then turn and face the Church. This has the advantage of not having to risk the reinforcements arriving then immediately attacking you, but you will probably have to fight through more of the Church forces afterward. Or you can take out Rhea first, which will cause all the non-Golem Church units to retreat. Killing all the Altered Demonic Beasts and potential beast units is a good way to trigger the Rhea-first style. Finally, if you really know what you're doing, you can prevent Rhea from appearing at all if you kill enough of the Kingdom generals simultaneously; even if you've triggered the Church reinforcements, if you can finish off the Kingdom Commanders on the same Player/Enemy Phase, it won't matter and you'll still win the mission.

There are many options for the order all these objectives can be achieved. One example style: take out the Bolting mage with a flyer, send everyone to the west side of the map across the Shoal, and ignore Sylvain's group and the transformed Demonic Beast near there. Sweep through all the west and central Kingdom soldiers as quickly as possible, using Warp / Dance / Raging Storm, and bait some of Mercedes's Fortress Knight guards toward you. Take them out, and bait Mercedes herself either with a magic tank or by getting her to use Fortify. After defeating Mercedes, kill Dedue with a mage. The central and western part of the map should be cleaned out, and Sylvain (/Great General) likely has 2-3 Demonic Beasts for company. You can slow down a bit now; lure out the beasts one at a time and defeat them and Sylvain. On the turn that the final Demonic Beast perishes, you'll be positioned to fight Rhea the very next turn. Stay away from the southern edge where a Bolting mage Church reinforcement will rudely pop out. You will get to greet Rhea and her 2 Holy Knights the next turn - ideally with the Gambit Impregnable Wall up to tank them, but sufficiently evasive characters on defensive terrain can manage it as well. Throw everything you have against Rhea afterward, which will cause the rest of the Church to retreat. After that, clean up the Golem, then settle things with Dimitri at his fortress.