Start a Wiki
Field of the Eagle and Lion 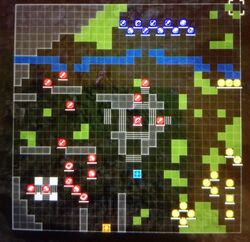 Byleth leads their house into battle and overcomes the opposing two houses, securing a win. The three house leaders meet in the aftermath and congratulate Byleth on their leadership in battle that lead to their house's victory. They return to the Monastery to celebrate their victory over a modest feast.

Defeating the most enemies: Blessed Lance

This is yet another Mock Battle, thus the chapter has a Casual Mode setting, allowing any fallen character to remain playable after the chapter ends even if the player has the game set to Classic Mode. The chapter also has a hidden score based on how many enemies are defeated between the three houses. If the player defeats more enemies than both of the opposing houses, they will earn a reward after the battle's conclusion. Catherine, Shamir, and Cyril cannot be deployed on this map, even if they have been recruited.