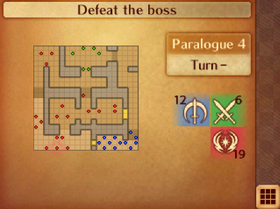 Dwyer (NPC, talk with Jakob or end of chapter)

Chapter script
[view]
“Enemies are attacking the rotting mansion of Dwyer, Jakob's son, lives. Jakob and company set out to confront the enemy, while Dwyer hangs back as a healer.”
—Opening Narration

Fight or Flight (闘わぬことの意味 The Meaning of Not Fighting in Japanese version) is Paralogue 4 of Fire Emblem Fates.

This paralogue will be unlocked once Jakob has obtained an S-Support with someone.

Perhaps one of the easiest of the children's Paralogues, this Paralogue can be completed in one turn, if the player does not wish to obtain any experience or if the player wish to save the uses on Dwyer's staffs.

The player starts at the south-eastern area while the boss is in the south-western area, with a door blocking the way. Having a unit with Locktouch to open the door and putting a strong pair within the boss' range will simply finish the Paralogue.

If the player wants experience, they can do so by fighting the enemy instead. There are five Knights protecting Dwyer; two are static while the other three can move, but only if an enemy is in range. Dwyer will heal them if they take moderate damage with his Mend, Sun Festal or Physic.

At the end the player receives a Friendship Seal and a Talisman.