Fimbulvetr is an A-rank Anima tome recurring in the GBA titles of the Fire Emblem Series and appearing again in Fire Emblem Fates and Fire Emblem: Three Houses. In Fire Emblem: The Binding Blade, this tome cannot be obtained in the main storyline, and is instead acquired upon unlocking Brunnya for use on the Trial Maps. This tome's help description reads that it conjures "Blasts of Ice" when cast.

In general, late-game boss characters of the Sage class use this tome. Also, when a character possessing a high Resistance stat enters the Arena, Sages wielding the Fimbulvetr tome tend to appear as opponents.

Unlike its other incarnations, the Fimbulvetr in Fates is a common C-rank tome, acting as the tome equivalent to a Steel weapon.

The Icy Fimbulvetr that debuts in Fire Emblem Heroes is the exclusive weapon of Marianne.

In the three GBA games, Fimbulvetr serves as the strongest non-legendary Anima tome. It could theoretically be a good option for taking on promoted enemies with high HP and middling to low Speed, or for one-shotting enemy units that would otherwise endure a round of magical combat. Unfortunately, it consistently appears too late to be particularly useful. In fact, in both The Binding Blade and The Sacred Stones, the player should already have an S rank anima tome in their inventory before even getting a chance to acquire Fimbulvetr. As Fimbulvetr is essentially inferior to Forblaze and Excalibur in every way, it basically serves as a lesser 'back up' spell to the legendary weapons. Its Weight in The Blazing Blade and The Sacred Stones also significantly limits its usage, as even Moulder will not be able to wield it without a speed penalty unless he is given a Body Ring.

In Three Houses, Fimbulvetr is a Black Magic spell that can be learned by six characters. Of the six options, Bernadetta and Shamir tie for the worst due to their subpar Magic growth rates, even if Bernadetta has a higher cap on her Magic stat between the two. Additionally, Fimbulvetr is a spell that five of the users learn at Reason Skill A, meaning heavy investment is needed to unlock it, while Constance learns it at B. It retains a notable weight, though it is not quite as heavy as it's previous incarnations in the later GBA era were. As spells restock after maps, Fimbulvetr has a sharp drop in uses, having only 3 uses, and a drop in accuracy.

In Tokyo Mirage Sessions ♯FE, Fimbulvetr is the strongest single target Ice spell in the game, and is among the few severe-tiered skills in the game. It is learned by Kiria Kurono on New Game+ files from her strongest Carnage, Sharur, which said Carnage she inherits the skill from also being NG+.

In Norse mythology, Fimbulvetr literally means "the great winter". This winter is one that is said to last three years, and is marked by warfare and bloodshed. This essentially marks the beginning of Ragnarok, the end of the world.

Sprite of Icy Fimbulvetr from Heroes. 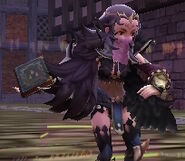 Nyx wielding the tome of Fimbulvetr in Fates.

Nyx casting Fimbulvetr on an enemy Faceless in Fates.