Lance Knight
[view]
“I, Fiona, Steward of Marado, do gladly swear allegiance to your Liberation Army. I and my men bind ourselves to your fate. Use my army as best you see fit.”
—Fiona to Micaiah in Raise the Standard in Radiant Dawn

Fiona is a playable character from Fire Emblem: Radiant Dawn. She is the daughter of Lanvega, one of Daein's Great Four Riders. She is also the ruler of the independent Marado territory in Daein.

After The Mad King's War ended and her father died, Fiona continued his legacy and sought to maintain her country's safety. Initially, she sides with the Begnion Occupational Army, though Jarod does not trust her. After seeing the Begnion Occupational Army hold civilians as hostages to make the Dawn Brigade surrender, Fiona defects and joins Micaiah's side. From this point on, she aids Micaiah in the liberation of Daein and remains as one of her soldiers during the war against the Laguz Alliance. Following this, she joins the heroes in their mission to defeat Ashera.

After the war, Fiona returns to Marado and continues to watch over her beloved people, protecting them until the autumn of her years.

While Fiona is young, she is a mature, level-headed and considerate leader, making wise choices to protect her people no matter the cost. She is a true warrior at heart who believes in Micaiah's cause and takes pride in fighting as a knight of Daein. She is an honorable knight and opposes cruelty towards civilians, which lead her to betray the Begnion Occupational Army.

* Only if Lance mastery rank is at B or lower.

Fiona has incredible potential. With high growths, and semi-suitable caps, Fiona has higher Luck, Speed, Resistance, and Defense than Titania, Oscar, and Geoffrey. She suffers from mediocre Strength and Skill, as well as a middling HP growth, but their growths are still decent enough to grow semi-consistently, however her magic stat is somewhat high, making her innate Imbue scroll very useful. Adding to this, she has a very steady biorhythm, an earth affinity that gives high avoidance to herself and supporters, and default skills Savior and Imbue, which allow her to rescue other units without penalty and sustain herself on the battlefield with her decent Magic stat. A fully trained Fiona is an incredibly versatile unit.

However, despite her unrivaled potential, she arrives at a low level with absolutely pitiful base stats and extremely limited availability. If she is to be trained she will require heavy investment, such as a forged weapon to overcome inadequate strength to wield her starting lances, bonus experience and lucky level up boosts. Even then, she can only be deployed in two chapters in Part 1 where enemies can easily kill her in a single round, and later is stuck with the pressing Dawn Brigade chapters of Part 3, so raising Fiona to her true potential is much easier said than done. This harshly lowers her viability in any sort of efficient run. At least she has a mount, but her only chapters in part one are indoors.

Overall, Fiona has the combination of high speed and luck to dodge, and high Defense and Resistance to withstand attacks if she does get hit. Her defensive caps are quite disappointing, however her speed and luck caps are 34 and 35, respectively, which is decent. Fiona does have the highest potential among all the Paladins and can end up the most useful, but she is definitely the hardest to train.

Valiant Lady of Marado - Fiona
As Lady of Marado, Fiona watched over her beloved people and protected them until the autumn of her years.

Fiona is illustrated in the trading card game with the following cards: 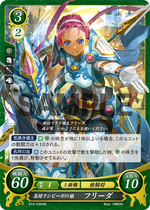 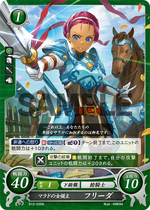 Fiona's artwork as a Lance Paladin in Fire Emblem 0 (Cipher).

Fiona's artwork as a Lance Knight in Fire Emblem 0 (Cipher).

Fiona as a Lance Paladin in '"Fire Emblem 0 (Cipher).

Fiona as a Lance Knight in Fire Emblem 0 (Cipher). 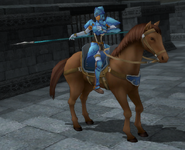 Fiona's battle model as a Lance Knight in Radiant Dawn.

Fiona's battle model as a Lance Paladin in Radiant Dawn.