Commander of the 5th Wing of Ilia's Pegasus Knights

Marin Miller
[view]
“Look, everyone. Your sacrifices were not in vain. I'll fulfill our duty, even if I must do it myself. I am a true knight of Ilia!”
—Fiora, in Chapter 18.

Fiora is a playable character from Fire Emblem: The Blazing Blade. She is the honorable commander of the 5th Wing of Ilia's Pegasus Knights. Fiora is also the older sister of Farina and Florina.

Fiora is the older sister of Farina and Florina and the commander of the 5th Wing of Ilia's Pegasus Knights. She has a solid relationship with Florina, helping her grow as a knight despite her mistakes. She often quarrels with Farina, which stems from an incident in the past. Farina once got into danger during a practice maneuver, forcing Fiora to abandon her mission to rescue her. This unfortunately caused her to gain a massive termination fee. Upset that Fiora gave up her honor for her sake, Farina told her that she should have left her to die. The two got into a bitter argument, leading to Farina leaving to become an independent mercenary.

Fiora and the Ilia pegasus squad are sent on a mission to investigate the Dread Isle under orders from their current employer, Lord Pent of Etruria. There, her entire subordinates were slaughtered by the Black Fang, leaving her as the sole survivor and she developed survivor's guilt as a result.

Believing it to be her duty, she embarks on a suicide mission to avenge her fallen comrades. However, she eventually meets her younger sister Florina, who convinces her to give up the quest for revenge and join the army led by Eliwood, Lyn and Hector. Pent forgives her for her failure as he failed to give her proper information of the mission.

Fiora can be reunited with Farina during Hector's tale. The two can make amends with Farina revealing that she asked a large sum to be hired by Hector's army to help pay off Fiora's debt.

Fiora would eventually form a mercenary company after the war, providing funds to the war-torn Ilia.

Fiora is also one of Eliwood's potential wives. Should she be chosen, the two profess their love at the battle at Dragon's Gate. Fiora moves to Pherae and marries Eliwood, becoming Marchioness of Pherae. Just before Eliwood's coronation, the two meet in private with Mark, discussing the future. The couple request that they become their future child's godparent. While Mark accepts the request, the tactician vanishes after Eliwood's coronation, never to be seen again. She eventually gives birth to Roy who is the hero of Binding Blade. Fiora is nowhere to be seen in Roy's journey, so it's assumed that she passed on in a moment between the two games.

Fiora is a serious woman with an indomitable spirit, one of the best warriors of Ilia. She has a strong sense of honor and responsibility, caring about decorum and following strictly rules and protocols, prefering to always act with dignity and grace. As expected of a knight of Ilia, Fiora is deeply loyal to her homeland. While dutiful and responsible to a fault, she often compromises her own safety for the sake of others.

Fiora tends to be quite stubborn and prideful, as she states that she hates to admit her inability to complete every task alone, she has a very hard time relaxing. After her pegasus rider squad died on mission, Fiora developed a survivor's guilt, and blamed herself for the tragic events, despite Pent forgiving her due to his own misgivings.

Her tendency to be a straight laced all the time seems to cause problems. One example being with Kent, who thinks similarly as her, and both try follow the military regulation that "men and women should not get close without a reason". In her support with Eliwood, he notes that Fiora tends to take too much responsibilities and forgets to take care of herself. Farina also notes negatively that Fiora tries to do everything by herself. She is very reluctant to ask help or let people to take care of her.

As the eldest of three sisters, Fiora is a naturally nurturing person. For the sake of her family, she would gladly sacrifice anything to save them from danger. She did so for Farina, resulting in her large debt and a bitter argument that caused a rift between the two. She treats Florina like a little girl, but over the course of their support, she quickly acknowledges her growth having spent time fighting for Lyn.

Description: Commander of the 5th wing of Ilia's pegasus knights.

*Normal Mode only
**Hard Mode only

She comes as an Other Unit in Chapter 18 (Chapter 19 in Hector's mode). Speak to her with Florina.

Fiora is an excellent unit, given the traits of a fairly early flier. Her Constitution gives her high Aid, letting her rescue some rather heavy characters like Hector even after promotion. She is quite fast, able to double most opponents at base with a Slim Lance, and even pick on slower opponents when wielding an Iron Lance. Combine that with her good mobility, and she should gain Speed and Strength rather quickly, improving her offense even further. She particularly excels at taking on mages when leveled to the point of doubling, due to her very high Resistance and Speed. She is one of the game's most magically-durable units, which makes her valuable in maps like Hard Mode's Cog of Destiny. Her solid Lance rank is another point in her favor, letting her use the Axereaver she joins with to handle brigands. Lastly, while she is weak to bows, her surprisingly solid Defense, combined with bows only having x2 effectiveness in Blazing Blade, means that she can often survive a hit or two from enemy archers.

Fiora is often compared to Florina, who joins shortly before she does. There is little cost to using both, given that the Elysian Whip is one of the more common promotion items, but if slots are limited and the player can only use one, then the answer will largely come down to whether the player has played Lyn Mode or not. A sufficiently-leveled Florina in Lyn Mode will distinctly outclass Fiora, but a non-Lyn Mode Florina has very bad bases and has only a few chapters to catch up to her sister, making Fiora generally better.

Airborne Warrior
A pegasus knight of Ilia. Older sister of Farina and Florina. A knight full of pride for both her country and family. Appears in Fire Emblem: The Blazing Blade.

Defrosted Illian
A commander of the Pegasus Knights of Ilia. Led away from her snowy homeland to the islands by a mission. Appears in Fire Emblem: The Blazing Blade.

Fiora - Wing-Borne Warrior
Fiora flew many missions as the head of a mercenary company. Her donations saved many poor families in Ilia from destitution.

Eliwood and Fiora
Eliwood and Fiora were wed after the conflict. A group of Lycian nobles protested that she was a mercenary, but none could sunder their bond of love. They have a son named Roy, who will become a great hero.

Kent and Fiora
Although they returned to their respective countries, they visited one another often and their relationship bloomed. When Lyn abdicated Caelin’s rule to Ostia, Kent resigned, moved to Ilia, and married Fiora.

Sain and Fiora
Although they returned to their respective countries, Sain and Fiora continued to seek each other out. When Lyn abdicated Caelin’s rule to Ostia, Sain resigned his commission and moved to Ilia. They later wed.

Fiora is illustrated in the trading card game Fire Emblem Cipher with the following cards: 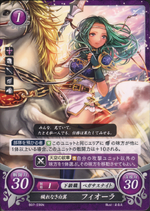 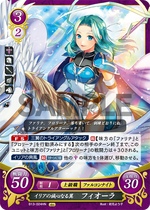 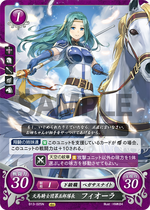 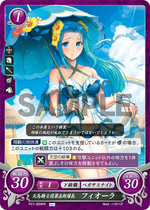 'Fiora' is a variation on the name 'flora,' which means 'flower' in Latin.