Chapter 7: The Rebellion of Ostia (joins in Chapter 9: The Misty Isles)

Natalie Lander
[view]
“I've also been training my sword skills, and I've won at many arenas around the continent. You don't have to go easy on me!”
—Fir to Rutger in a support conversation

Fir is a playable character from Fire Emblem: The Binding Blade. She is the daughter of Bartre and Karla, making her the niece of Karel.

She can be recruited only by speaking to her with Noah. She makes a brief cameo appearance in Chapter 17 of the Hasha no Tsurugi manga.

A swordswoman from the plains of Sacae, she yearns to be like her mother who was gifted in swords, and so is on a journey around Elibe in an attempt to hone her skills. As the rebellion against Lilina and Hector occurs in Ostia, she is oblivious to the turmoil, and is aquainted with Noah, training with him in the Arena.

She was later tricked by pirates on the Western Isles into going against Roy, while Scott seeks to grab her sword. However, by chance she met with Noah again, and soon joined the Lycian league.

Fir is incredibly innocent and ignorant to the ways of the world, making her quite gullible, being easily tricked by others into fighting.

Still, she is quite headstrong, and exudes the same calmness and single-mindedness of purpose as her mother, with Bartre even saying she is blessed with her face.

Description: A girl traveling around Elibe to hone her sword skills.

Fir is one of the two Myrmidons who join, the other one being Rutger. Fir joins at Level 1, at a time when most of your characters will be Level 11+ and she is a fairly difficult character to train in Normal Mode, but that only means that she has a lot of room to growth, should the player use her. In Hard Mode, she gains considerable bonuses to her stats across all areas. On top of this, she joins in a series of Chapters where the majority of the enemies fought will be Axe users, making her relatively easy to train here. Considering that most of Fir's base stats and growth rates are close to Rutger, the two will be very similar once trained. Should the player desire another Swordmaster or if Rutger died or had poor level ups, Fir can be a helpful addition to the player's army. Otherwise, Rutger can fulfill the same role with the benefit of joining earlier.

Her immense evasion, combined with both her weapon triangle advantage, and higher critical hit ratio thanks to Wo Dao, has enabled her to grind all the way from Level 1 to Level 14 while showcasing little to no problems on HP just from fighting against enemy pirate reinforcements. Making her low joining level not as problematic as it looks. And she will likely max out skill and speed while receiving notable buffs in HP and Luck in the process. But her low strength growths can potentially cause problems for her damaging later enemies and bosses. This can be coped with through use of energy rings and support conversations.

All in all, Fir is a certainly rewarding character to train, being able to surpass Karel and, with a bit of luck, and can potentially become on par with Rutger having inferior strength but superior luck on average.

Sword Student
A woman who travels in search of the best swordplay opponents anywhere. Appears in Fire Emblem: The Binding Blade.

Fir is among the first sword infantry units in the game and has maintained an interesting niche in Heroes mainly due to her high Res which allows her to not only effectively run Ploy skills, but also combat Mages and Dragons. Her Spd is also at a respectable level, able to score doubles on a handful of units while resisting being doubled by some of the strongest Spd oriented characters, especially with a Spd Asset. Unfortunately, she trades these strengths for relatively low physical bulk and an abysmally low Atk stat, causing problems in inflicting damage, especially with her earliest weapon. As time passed, newer skills were introduced and also a new personal weapon/weapon refine has given Fir a necessary boost to be a somewhat competent unit against certain units. Fir is a decent budget option, but faces stiff competition for her role. Additionally, Fir is lacking in her starting kit and requires heavy investment to be brought to a performable level.

Fir began with a Killing Edge, a moderately weak sword with its plus variant, though the draw of its Special Cooldown acceleration is useful. However, Fir is stuck with a low 36 neutral Atk. Fir benefitted from the weapon Refine System as she could upgrade her Killing Edge into a Slaying Edge, which has a higher Mt, but her Atk only improved to 39 with this version. Finally, Fir was gifted her own Personal sword, the Nameless Blade. Once again, this sword copies her initial weapon effect of special cooldown acceleration but with more might, finally achieving a 41 base neutral Atk. While still not a partifularly strong Atk stat, it is still 5 points higher than she originally had. Plus the sword’s refine not only grants a +3 HP boost, but also adds 10 damage when she procs her special.

Glacies is a perfect fit for her as it does take her higher Res to boost her damage by 80% of her Res when it procs and with her special cooldown acceleration, she can usually activate it in a single round of combat. Speed +3 is a flat Spd boost, which does bring her Spd to a higher tier to avoid further doubling from most of the apex sword users and more doubling on more units onto other units, but there are better options out there for the same boost. Pass provides Fir a means to escape enemy entrapment should she find herself boxed into a corner or against a wall, but the gimmick is overall unreliable in most situations as she should rarely find herself boxed in.

Nearly all blue units, even those with mediocre defense can easily take hits from Fir. Bulky Red units similarly can withstand a few hits from Fir and counterattack easily such as Zephiel, Xander, and Adult Tiki. Guard is particularly dangerous skill against Fir as most of her damage output comes from her special activation. Any means to slow it down severely reduces her overall impact. While she naturally can resist mages, she still takes significant damage from blue mages, particularly the strong ones like Reinhardt, Lute, and Ophelia can dispatch her easily.

Fir demands a lot of quality skills, but investment in them doe result in promising returns. Reposition is a standard option for all direct combat units for unit placement manipulation. Iceberg charges faster than Glacies which does lead to better overall damage output despite the 30% drop in Res used to calculate the bonus damage.

Like most sword infantry users, Fir likes having Wrath for the accelerated special cooldown and the bonus damage when it procs, which does stack on top of her Weapon Refine, leading to 20 bonus damage. On a budget, Swordbreaker or Desperation are standard options for a typical sword unit. Fir can run any Ploy skill she wants to as her high Res allows her to apply the debuff onto most of her competition, though usually Defense Ploy is her best option as the Def reduction allows her to inflict more damage.

Her Skill A depends on the direction one wishes to take Fir. Distant Counter turns her into a strong mage counter as few mages has the physical bulk to withstand an attack from her while she can take theirs. Warding Breath opens the possibility for Fir to further combat Dragon units with better effectiveness by boosting her Res when attacked and accelerating her special cooldown. This does allow her to immediately charge Iceberg after a single received attack and immediately unleash a powerful +20 damage attack plus her Iceberg damage bonus. In either case, Fir become a circumstantially powerful unit, but all depends on how she is built and how she is handled in battle. On a budget, Fury gives her a necessary boost to all four of her core stats plus the recoil puts her into Desperation/Wrath range faster.

Student of Spring
Daughter of the warrior Bartre and the swordmaster Karla. She has taken a moment away from training to visit the spring festival. Appears in Fire Emblem: The Binding Blade.

Fir - Heir to the Sword Saint (『剣聖』をつぐ者 “Kensei” wo tsugu mono lit. The succeeding "Sword Saint")
"Fir set out again to travel around the world in training. Her name eventually spread throughout the continent as the next Sword Saint, and her legends were to be told for centuries to come."

Fir is illustrated in the trading card game Fire Emblem Cipher with the following cards: 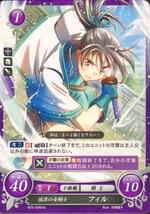 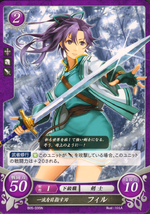 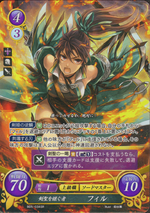 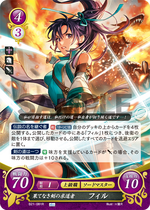 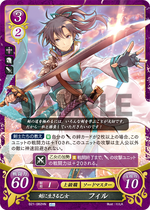 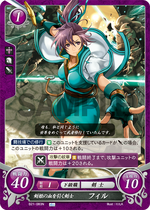 In Irish Gaeilge, the word "fir" is the word for "men", the plural for "man".